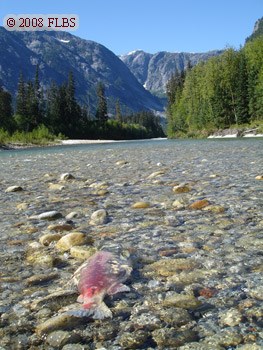 The Flathead Lake Biological Station (FLBS) of The University of Montana with the Wild Salmon Center (WSC), Moscow State University (MGU) and other cooperators has assembled a multi-disciplinary team of scientists to document salmonid biodiversity and productivity, as controlled by natural and cultural processes, of a suite of pristine Pacific salmon river ecosystems (observatories). The research focuses on salmonid habitat requirements that appear to vary with life history stage and in relation to population structure.  We believe that productivity of habitat is controlled by non-linear biophysical processes that create and maintain a dynamic or constantly Shifting Habitat Mosaic (SHM; described in detail in Stanford et al. 2005) throughout the river corridor from headwaters to the ocean.  Our research also addresses how salmon rivers and their stocks will respond to climate change. Runoff and temperature patterns are primary determinants of physical habitat in rivers and therefore critically influence salmon productivity. Since both variables may be changed significantly by climate warming, better resolution of climate effects is needed in order to produce robust conservation strategies for salmon and salmon related biodiversity. Human activities tend to reduce or dampen the variable nature of rivers in ways that should be predictable and, therefore, correctable given a robust understanding and modeling of salmon productivity and population dynamics in the context of the SHM concept.

The program is funded by the Gordon and Betty Moore Foundation as a part of its Wild Salmon Ecosystems Initiative. The FLBS began the program in Kamchatka, Russia, in 2001 under a formal partnership with the WSC and MGU for work on the Kol and Utkholok Rivers. The Kamchatka work is conducted under the auspices of WSC and with logistical support of the WSC office in Petropavlosk as the Kamchatka Salmon Biodiversity Program (KSBP).

At all of our observatories, we are proactively involving Federal, State, Provincial, Tribal, NGO and local entities with management or conservation interests in our sites and work.  Since the inception of the project, we have expanded our collaborators and partners to include British Columbia Parks; British Columbia Ministry of Environment; Fisheries and Oceans Canada; the Alcan Corporation; Alaska Department of Fish and Game; USGS Alaska Science Center; the US Forest Service, University of Idaho, and University of Washington Department of Fisheries.

In 2007 the project expanded beyond field work on the observatory rivers to include an extensive modeling component.  Modelers are now using data collected at the observatories to predict the flow of nutrients and materials through different floodplain habitats, and subsequently to predict the potential productivity of different habitats in different rivers.  The ultimate goal of the modeling component is to predict which Pacific salmon rivers have the greatest potential for salmon production, given their habitat and other physical and biological characteristics.  Modelers are also examining the potential effects of climate change on salmon rivers.

The Salmonid Rivers Observatory Network is planned for a 10-year period (2002 – 2012) to allow for long-term measures of processes and responses. The initial funding period (2002-2006) focused on identification of observatory rivers, partnering, initial field measures and development of the SHM sampling protocol for cross-site comparisons.  The current funding period (2007-2010) focuses on continued data collection at the long-term observatories, collecting data from Synoptic rivers for use in productivity modeling efforts, and linking the SaRON outcomes with other FLBS projects such as the Riverscape Analysis Project (RAP) and the Rio Grande (South America) Brown Trout Project.

Currently, we are in an analysis period. We are conducting a thorough analysis of the data, preparing papers on our results for publication, and developing an outreach initiative for conservation purposes.

Though hardware and software technologies have improved dramatically, the ecological community continues to be very slow to integrate technological change. Factors such as budgetary constraints, resistance to change, the availability of individual data management alternatives (i.e. Microsoft Excel), and network interconnectivity combine to form a barrier to entry for many institutions.

In order to address the larger issues of data integrity such as raw data preservation, data entropy, data access and distribution, and inter-project data comparisons, it is incumbent upon project and data managers to implement scalable architectures to manage collection, centralization, processing, archiving, and reporting capabilities before data collection begins.

We have developed a defined protocol encompassing data collection in the Salmonid Rivers Observatory Network. This protocol allows researchers to work between many sites across multiple ecosystems and countries while capturing consistent data and descriptions (metadata) through standardized collection techniques. For more information on this protocol, please refer to the full project document, available below. 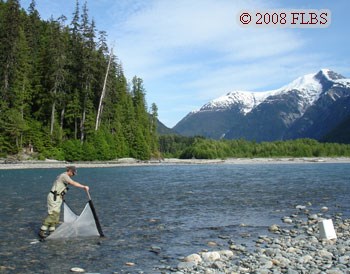 We have also created the FLBS Ecodata Portal, an interface to a scalable back-end architecture and data management structure capable of ensuring that distributed data is centralized and processed before data or metadata is lost or simply forgotten.

Wild Pacific salmon throughout California, Oregon, Washington, Idaho, and southern British Columbia have been declining for more than 100 years...

As rivers enter an unconstrained reach from a canyon section, the waters slow...depositing sediment and allowing riparian plants to establish and grow. It is the ecological processes in unconstrained flood plain reaches which are responsible for most of the diversity and productivity of river systems.

Death of Wild Salmon By A Thousand Cuts 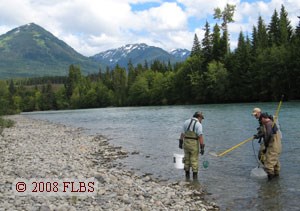 Where the Salmon Rule

SaRON Research on Earth and Sky

Salmon Find an Ally in the Far East of Russia