Understanding the Impact of Invasive Species 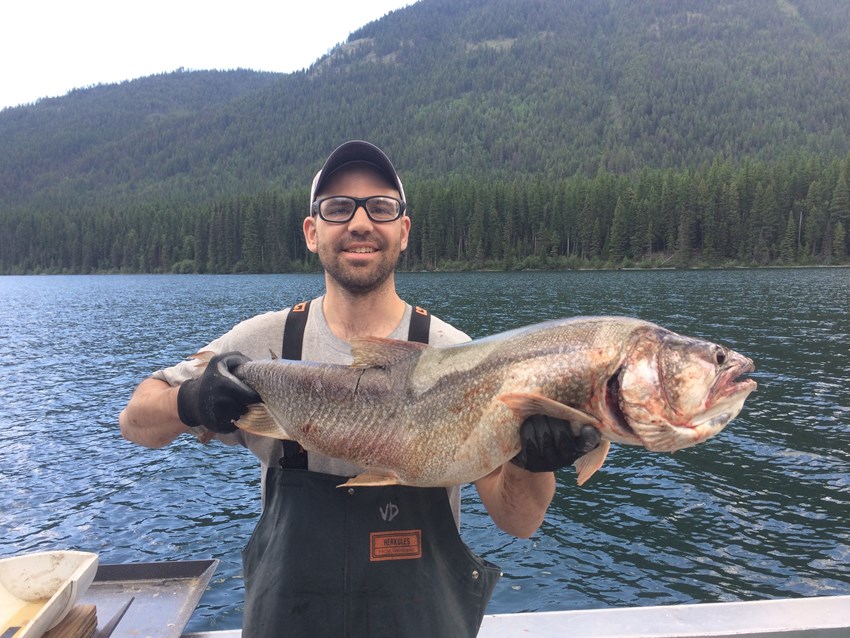 Invasive species cause biodiversity loss and about $120 billion in annual damages in the U.S. alone. Despite plentiful evidence showing that invasive species can change food webs, how invaders disrupt food webs and native species through time has remained unclear.

The study, recently published in the prestigious journal Proceedings of the National Academy of Sciences, used long-term fisheries monitoring records to determine the timing of invasion by a non-native fish predator, lake trout, in ten northwestern Montana lakes, and analyzed food webs from those lakes to determine how they changed and impacted native communities as their invasions progressed.

“Native bull trout populations have drastically declined in many lakes across western Montana due to competitive interactions with invasive lake trout,” said USGS aquatic ecologist and FLBS associate research professor Clint Muhlfeld. “For the first time, we show what happens not only to bull trout but entire food webs supporting them as lake trout invade and upset lake ecosystems over time.”

The study also showed that the food web effects of lake trout invasion were especially pronounced as lake trout abundance increased rapidly 25 to 50 years after colonization. After 50 years, lake trout were the dominant apex predator in these food webs. The study shows that, given enough time, invasive lake trout can disrupt and replace a native fish species, like bull trout, and create divergent biological communities that are vastly different than uninvaded ecosystems.

This study adds to a body of evidence showing that invasive species have affected western Montana. For example, until the late 1800s, around 10 native species of fish patrolled the waters of Flathead Lake, including abundant westslope cutthroat trout and bull trout. Beginning in 1905, fisheries managers began introducing nonnative species to the food web as a means to improve Flathead Lake tourism and generate more recreational fishing appeal. Today, there are more than 20 species of fish in Flathead Lake, and introduced species like lake trout, lake whitefish, and Mysis shrimp, dominate the food web in Flathead Lake, so much so that native species—including bull trout and westslope cutthroat, Montana’s state fish—have declined dramatically.

“This has been a truly collaborative effort,” said FLBS lake ecologist Shawn Devlin. “The work leverages the rather bleak history of introduction and invasion of non-native species in northwest Montana lakes into an ecological experiment built on the power of long term data and a deeper understanding of lake ecology.”

The study’s results stress the importance of protecting entire landscapes from biological invasions. The use of innovative biosurveillance monitoring techniques, like environmental DNA, are also critical to increase the likelihood of detecting invaders before they become established. For ecosystems that have already been invaded, this study’s findings can be used to inform proactive control efforts during the early stages of invasion to avoid food web disruptions that may be difficult to reverse.

The study was led by Charles Wainright, a former FLBS graduate student and fisheries biologist with the U.S. Fish and Wildlife Service, and was co-authored by Clint Muhlfeld of USGS and FLBS, FLBS Director Jim Elser, FLBS assistant research professor Shawn Devlin, and Samuel Bourret of Montana Fish, Wildlife & Parks. The study was supported by the USGS Biological Threats Program, FLBS and philanthropic gifts. The complete study is now available on the Proceedings of the National Academy of Sciences website.