Bio Station Internship for Environmental Law Students: “Where the Rubber Meets the Road in Science and Policy”

As afternoon light faded into a dark winter evening, Victoria Hill sat at her computer after finishing a lengthy law school midterm. She was exhausted, but clicked over to her email before getting up from her desk. At the top of her inbox sat a message from the Flathead Lake Biological Station (FLBS), telling her that she had gotten the position of Transboundary Environmental Science and Policy Intern for the summer 2021 session.

“I remember [they] gave me the weekend to think about it,” Hill said. “But I knew that I was going to take it right when I got it.”

Hill is a law student at the University of Montana, and had been hunting for possible internships to fill her summer. The FLBS position is for law students with an interest in environmental and natural resource issues who want more exposure to science and hands-on research experience. The intern develops a scientifically informed approach to environmental law topics, and then uses their expertise to help the Bio Station and its partners navigate a legal issue. According to Hill, this position stood out from other traditional law student opportunities due to its unique environmental focus and tight-knit community. Before coming to the Bio Station for the summer, Hill was able to connect with previous interns and get to know her mentors. 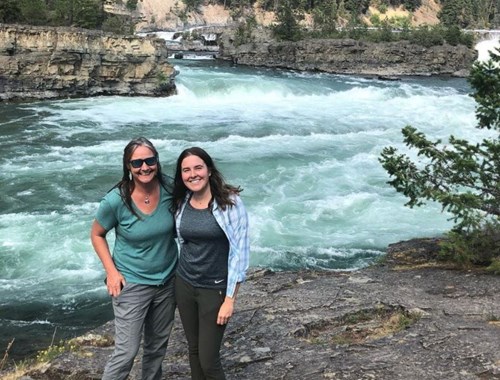 “Mentorship is something that I really value,” Hill said. “It really made it feel like a community.”

Hill’s FLBS mentor is Erin Sexton, who has supervised the philanthropically-funded Bio Station Environmental Law Internship since its inception in 2018. Sexton is a Senior Research Scientist at FLBS who studies transboundary rivers between Canada and the United States. Specifically, Sexton’s work looks at the impact of upstream pollution entering Montana’s waters.

“I think they’re guaranteed a learning experience, because the issue’s so complicated,” Sexton said.

Right now, one focus of particular interest is that of selenium contamination in the Elk River and the transboundary Kootenai Watershed. The selenium is leaching from Canadian coal mines in frightening levels, and has already resulted in the disfiguration of fish. This exposure to selenium endangers downriver communities, especially those that depend on subsistence fishing.

“If you want to be where the rubber meets the road in science and policy, that's where my work has been sitting for a few years,” Sexton said.

As an intern, Hill will get to join Sexton in her work, meeting with diverse stakeholders and agency personnel, while learning directly from Sexton’s extensive research. Hill will then write a culminating legal memorandum addressing a question raised by Sexton’s work.

Hill is currently investigating what individuals or organizations in the United States can legally do to hold Canadian mining companies accountable for pollution entering the U.S. via transboundary watersheds. This type of information will be directly useful to those trying to address the problem of selenium contamination in the Kootenai Watershed from the Elk River Basin coal mines. That is Hill’s main goal for this summer: to produce something that actually has an impact.

“I really want the document that I produce to be accessible to people,” Hill said. “I want my paper to be something that your average person could read and understand and be able to clearly see what the problem is.”

According to Michelle Bryan, professor in UM’s  Alexander Blewett III School of Law and the campus-based co-mentor of the internship, that’s her goal, too. It’s not just about knowing what the law is, said Bryan. It’s about figuring out how that information can actually be used, and communicating that to interested stakeholders. In this way, the student isn’t just writing for other lawyers, they are creating something beneficial for the rest of the community as well.

“We want this student to contribute to a real world need,” Bryan said. “I want the student to leave behind a piece of writing that others can use.”

Connlan Whyte held this internship in 2019. Like Hill, he also focused on selenium contamination in the Elk River Basin from Canadian coal mines, asking the question of whether the U.S. could establish and enforce environmental regulations that Canada would have to follow. Whyte’s internship transformed into a continuing professional experience, and he worked with Sexton and the Confederated Salish and Kootenai Tribes for the following year on the same topic.

Whyte recently graduated from the UM Law School, and is beginning a position in Helena as a clerk for a federal judge. When Whyte was applying for jobs, the FLBS internship on his resume always caught the eye of his interviewers. According to Whyte, the uniqueness of the role really stands out in the professional world. “There's nothing out there in Montana right now like it,” Whyte said. “Nothing beats it.”

Whyte also found that his time at FLBS allowed him to explore issues up close in an environment that is different from a typical legal internship.

“I think I was one of the few people in my class who really got to, as a first year, independently dive into a pretty singular legal issue,” Whyte said. “And really get deep with it, which doesn't happen a lot.”

This internship was started in 2018 thanks to leadership gifts from Monte Beck, an accomplished lawyer, and his law firm Beck, Amsden & Staples PLLC based in Bozeman. Over the course of his career, Beck has taken on numerous environmental issues — including that of copper mining pollution in his hometown of Anaconda and along the Clark Fork River. Beck is the 2021 recipient of the Montana Trial Lawyers Association Career Achievement Award.

Montana is one of only a handful of states whose constitution guarantees residents a “clean and healthful environment.” For Beck, educating lawyers about science creates a new type of first responder — someone who can keep an eye on corporations that may try to take advantage of the state and abuse peoples’ right to a clean environment.

“That person can impart the value and the power of the law to educate and inform the scientists about even their own rights as citizens of Montana,” Beck said. “As much as I can, [I want to] embolden people to speak the truth and hold responsible parties accountable for their wrongdoing.”

The desire to create scientifically-informed, environmentally vigilant lawyers was what inspired Beck to start this internship in the first place. The end goal is to protect the home we all live in.

“Every Montana citizen has a vested interest in this,” Beck said.

Dan Brister was the inaugural FLBS Environmental Law intern in 2018. After working in nonprofit conservation for nearly fifteen years, Brister felt that much of the tangible change that he witnessed was the result of legal work. This inspired him to pursue his law degree.

“I wanted to find ways to be more effective, or to get a different set of tools in my toolbox,” Brister said.

Today, Brister is a practicing attorney with Ferguson Law Office PLLC, a firm in Missoula that specializes in things like water and environmental law. For Brister, the FLBS internship provided an opportunity to get out of the office, gain some hands-on experiences, and learn more about the scientific process and data interpretation.

“Especially with environmental law and natural resources law, it's equally important to have a solid grasp of the science that is often beneath and supporting all the other work,” Brister said.

With additional philanthropic funding, FLBS hopes to expand the internship program beyond the summer residency. Since they have already had summer law interns continue their engagement and projects into the school year, expanding the length of the student opportunity to the academic year is a logical next step.  Ultimately, the goal is to offer a year-long legal fellowship for recent graduates. These expanded opportunities would further cement the interdisciplinary relationship between scientific researchers and legal professionals, helping to protect Montana’s waters and environment for years to come.