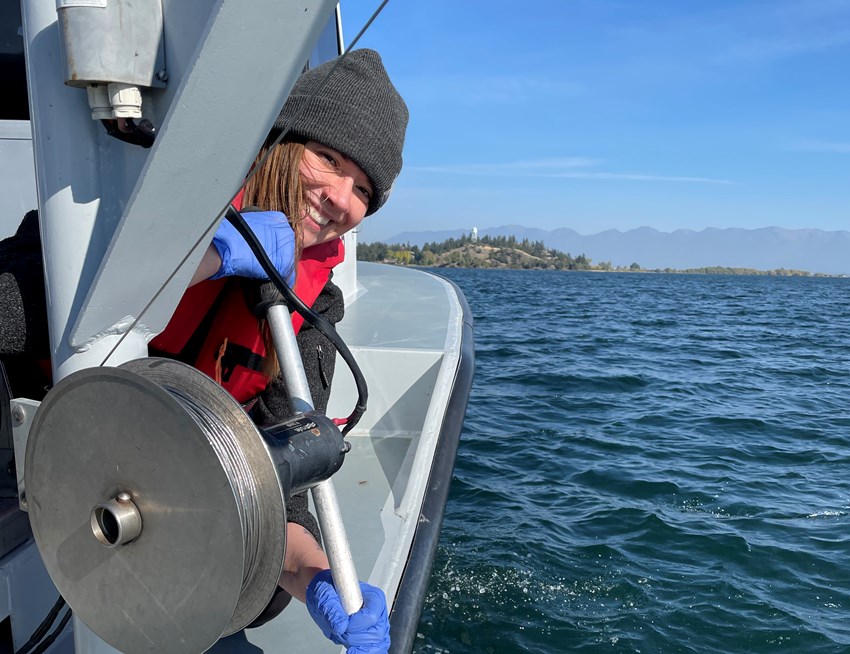 It’s been another active year for invasive mussel prevention in Montana. Nearly 100,000 boats were inspected this year by state, tribal, federal, and local watercraft inspectors, which resulted in the successful discovery and decontamination of fifty-three mussel-infested watercraft.

The importance of accurate early detection cannot be overstated, as it plays a key role in the ability of stakeholders and managers to respond to the arrival of zebra or quagga mussels and prevent full-blown invasion.

All samples collected by FLBS have either already been processed or are currently being analyzed by researchers at state and Bio Station laboratories. To date, none of the processed samples have tested positive for the presence of invasive mussel DNA.

“Although we have found evidence of AIS spreading in the Flathead Basin, such as flowering rush and curly leaf pondweed, we have not detected the presence of zebra or quagga mussels yet, which are by far the most detrimental of the threats,” said Matson. “However, this does not mean we can let our guard down.”

Matson emphasized that, while AIS boat inspections have done a great job of filtering out the threat from out-of-state boaters, Montana is very fortunate a mussel-infested boat hasn’t slipped through and introduced the mussels into our waters yet. He also stated that continued collaboration is vital to the long-term success of Montana’s invasive mussel prevention.

“Over the last several years, the State of Montana has recognized the importance of partnerships to combat the spread of AIS and has provided funding and support to keep programs strong and effective,” Matson said. “Whether it be boat inspections, year-round monitoring, or education outreach, the state cannot do it alone.”

In addition to boat inspections, sampling, and monitoring, there are two other key areas that are crucial to FLBS, statewide, and regional AIS prevention efforts.

The first is ensuring that the sampling process is yielding the most accurate results possible. Securing a grant from DNRC, Matson and FLBS graduate student and environmental DNA (eDNA) coordinator Leif Howard are working to optimize the decontamination protocol for eDNA sampling gear to minimize the potential for false results and eliminate uncertainties regarding AIS detection sensitivity. 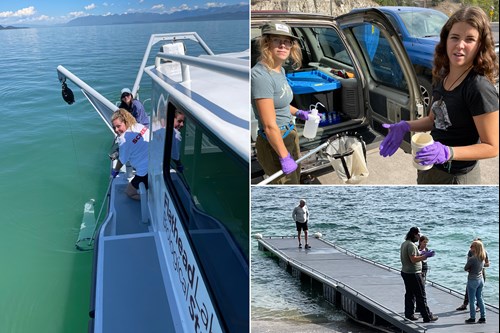 Because eDNA can be found in water year-round, its use in early detection monitoring provides an opportunity to detect mussels well before the standard monitoring technique of microscopy, which can only be used during a brief window in summer when mussels are spawning.  By the time mussels are spawning they have already become well established, and by then it might be too late. Being able to detect mussels with eDNA before they spawn widens the optimal response window.

“[But since] environmental DNA sampling technology is very sensitive to false positives, which can lead to confusing results for managers to interpret, decontamination is crucial to preventing of false positives,” said Matson. “Our studies are helping to develop more efficient, effective, and safer decontamination processes, which will encourage other groups to adopt the technology and provide for more reliable analyses.”

Simultaneously, Matson and Howard are advancing another study that examines sample preservation protocols. Initially launched in 2021, this study has—to this point—found that extracted DNA from samples held in long-term storage are still viable over a year later. Therefore samples can be analyzed later, when future funding becomes available to cover the analysis costs. Additionally, the ability to analyze stored samples could allow researchers to establish a timeline of arrival and spread when an invasion has occurred.

The studies Matson and Howard are conducting will help scientists around the nation better understand the long-term effects of time on stored samples and how to increase their shelf lives. Both studies directly translate into enhanced capabilities for accurate early detection of invasive mussels and other AIS, and the findings were presented to the Montana Invasive Species Council and the Upper Columbia Conservation Commission earlier this fall.

The second key area that has been shown to play a powerful role in the success of AIS prevention is community education and outreach. Celebrating its sixth consecutive year partnering with the Confederated Salish and Kootenai Tribes (CSKT), and continuing to work closely with Montana Fish, Wildlife & Parks (FWP), the Bio Station AIS program interacted with over 150 members of the general public during sampling along the shores of Flathead Lake.

These opportunities allowed FLBS scientists to field questions about what AIS sampling crews are looking for, describe the statewide early detection sampling efforts, and explain the “Clean, Drain, Dry” campaign that has been pivotal outreach messaging throughout the state’s coordinated effort to prevent invasive mussels from infesting Montana’s waters. Outreach materials contributed by FWP and the Upper Columbia Conservation Commission, such as stickers, coloring books, and bar coasters, were passed out. 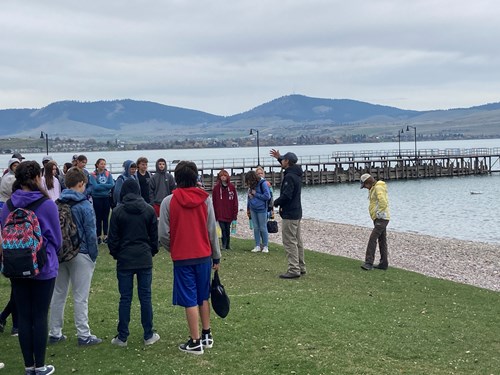 FLBS also partnered with CSKT to hold the 6th Annual Mussel Walk at three separate events, through which nearly 200 students and educators from Bigfork Middle School, Polson Middle School, and Two Eagle River School learned about AIS species and prevention. Each Mussel Walk culminated in a survey along the beach at Wayfarers State Park or Salish Point for mussels and other invasive species.

Matson and his team’s educational outreach also included important conversations with marina workers and State Park staff and volunteers who, as potential first line of contact for out-of-state boaters, learned about statewide prevention efforts and how they can prevent AIS by inspecting incoming boats.

While boat inspections deal with the immediate threat from out-of-state boaters, Matson is clear that education and outreach remain among the most important components to invasive mussel prevention. Back in 2016, many boaters may have been annoyed or reluctant to have their boats inspected because they didn’t fully understand what was at stake. Today, after years of communicating the “Clean, Drain, and Dry” campaign, Matson believes that most people have not only heard about AIS, but also understand the importance of protecting our waters.

“Taking the local elementary classes on mussel walks and giving them knowledge of ways they can protect the environment empowers them,” he said. “When I mention they are our future leaders I see their chests puff up with pride. It’s that connection between responsibility and respect for our waters that we can truly make a difference for future generations.”