Leif  Howard had heard of the mussels before. He’d even seen pictures of them. But he had never seen them alive in a lake until recently, when he stood on the shore of Lake Bemidji in Minnesota. He walked down to the water’s edge from his campsite, and saw them growing on a rock. He picked them up and held them in his hand, these mussels that have become an omen of irreversible change for so many lakes across the country.

“I walked out on the fishing pier and I looked down,” Howard said. “I was like, oh gosh, they're right there.”

In  aquatic  ecosystems, invasive zebra and quagga mussels spread like the plague. Once they establish their population, they are capable of completely taking over. They cover pipes, stones, beaches, docks, and can choke out native species. They hitch rides on boats, trailers and fishing gear, and are unknowingly introduced into new bodies of water every year. Since being introduced to the U.S. in the 1980s, zebra or quagga mussels have been detected in well over half of the states in the country.

Howard is the Montana Conservation Genomics Lab eDNA Coordinator, and a Research Assistant at the Flathead Lake Biological Station working with Dr. Gordon Luikart. The two of them drive to lakes in a handful of different states, testing eDNA sampling methods. eDNA, or environmental DNA, are little drifting strands of DNA that allow scientists to detect organisms without actually having to capture the organism itself. For invasive mussels, like the one Howard held in his hand on the shores of Lake Bemidji, eDNA detection techniques have the potential to be a powerful early detection tool. And when it comes to invasive mussels, early detection can mean the difference between a clear lake and an irreversible infestation. 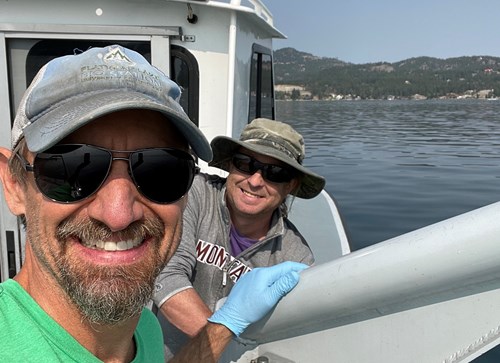 The trouble is, the very sensitivity that makes using eDNA a powerful early detection tool also leaves results open for interpretation. A positive detection of eDNA, for example, doesn’t necessarily mean there are living organisms or an established population of invasive mussels in a body of water. This ambiguity can lead to a lot of confusion.

As part of their project, Luikart and Howard are working on a glossary of eDNA terms that is dozens of pages long. When published, this glossary will be an attempt to clarify and further standardize the language used to address eDNA detection for aquatic invasive species.

“We’re creating the scaffolding on which to use results from our monitoring technique and for decisions made on our results to stand on,” Howard said.

Adam Sepulveda is an aquatic ecologist for USGS in Bozeman, Montana. His research has focused on different tools for aquatic invasive species (AIS) detection, including eDNA. While it’s not a perfect method, he says, it can alert people to the potential for danger.

“All it is, is a smoke detector,”  Sepulveda said. “You’ve got to walk into the room where the smoke alarm’s going off, and figure out if it's a fire or if it’s just burnt toast.”

Sepulveda recently co-authored a paper called “What do you mean by false positive?”, published in Environmental DNA. In it, he analyzed the difficulty surrounding the term “false positive,” an issue in eDNA detection. A “false positive” is the term used to describe a test that is positive for mussel DNA in a body of water that does not have any live mussels. These test results may turn up because of cross contamination of DNA by boats or animals. Sepulveda was inspired to write this paper after the beginning of the COVID-19 pandemic, when the term “false positive” became colloquially used by the general public.

Since a positive test for AIS doesn’t necessarily mean there is an aquatic infestation, Sepulveda is working on a method for dealing with diagnoses in a way that best benefits all potential stakeholders. Because every body of water in every state is different, it’s a way of thinking, not a defined road map. He has made a “decision tree,” and is now working on decision support tools to help managers figure out how best to respond to AIS eDNA detections.

According to Sepulveda, the decision tree is like a poker game, where resource managers can hedge their bets to achieve the best possible outcome for human and aquatic stakeholders.

“If you win, you win big,” Sepulveda said. “And if you lose, you don't lose all your chips.”

In 2017, after the first detections of invasive mussels in the state, Montana created its first AIS Bureau within Fish, Wildlife & Parks. The inaugural bureau chief for this relatively new department is Thomas Woolf, who had previously been doing similar work with aquatic invasives in Idaho.

“There’s no doubt the potential for eDNA is huge,” Woolf said.

And yet, he says that close coordination between resource managers and researchers is necessary to define response triggers. Deciding how to react to a detection takes ongoing coordination. Overreacting could mean wasting a lot of state funds on a non-issue. But not reacting fast enough could result in irreversible damage to a body of water.

“Working in AIS, I never in my wildest dreams imagined it would be so political and complicated,” Woolf said.

Nathan Owens is the Aquatic Invasive Species Coordinator for the Utah Division of Wildlife Resources. He has worked with aquatic invasives for nearly a decade, first as a technician, then as a biologist, and now as coordinator for the entire state. According to Owens, eDNA can be a powerful tool for early detection, but only if users understand exactly what it does.

Owens has had many conversations with stakeholders throughout Utah about what eDNA is and how it can be used. Misunderstandings surrounding the language can result in hesitancy to use the technology at all.

“The term ‘false positive’, I think, is problematic when it comes to eDNA because it's not necessarily a false positive. They found DNA, which is what they were looking for,” Owens said. “So there's nothing false about it.”

That’s why Owens takes the time to explain the language he uses when discussing eDNA testing to stakeholders. Without sharing common ground on terms used, it’s hard to agree on the best course of management action if a detection turns up positive.

“If you're not clear on the terminology and the language being used, it's really hard to dive deep into some of this,” Owens said. “There's just too much open to interpretation. And that just leads to a lot of confusion and then a lot of ambiguity when it comes to actually what that response would look like.”

Without eDNA, early detection programs usually take water samples from high profile bodies of water and analyze them in a lab, looking through a microscope for veligers — tiny baby mussels. The confirmation of veligers is a strong way to detect an infestation because it confirms the presence of the organism itself. However, by the time you find veligers, it can be harder or impossible to solve the problem.

According to Owens, eDNA can complement veliger testing, not replace it. But he cautions that it’s important to make sure that everyone is on the same page first.

“If you cannot come to an agreement on what those responses should look like, then you're probably not ready to adopt eDNA into your program,” Owens said. “It's too prone to different interpretations.”

Still, early detection of AIS offers the best chance at removal and the prevention of spread. Once a population of invasive mussels has taken hold, said Owens, it’s really, really difficult or impossible to remove.

“There is no decent option out there right now,” Owens said. “Our assumption has always been, if we find a mussel population, it goes into strict containment in order to prevent its spread to other reservoirs. But by all accounts, that reservoir will be infested indefinitely.”