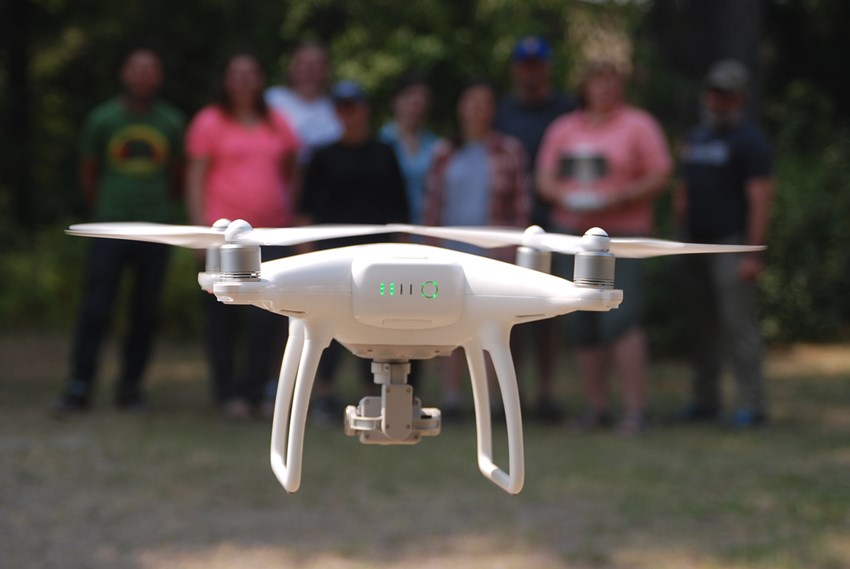 Diane Whited first began work as the GIS/Remote Sensing Analyst for the Flathead Lake Biological Station in 1999. Her research focuses on the application of GIS (Geographic Information System) and Remote Sensing (aerial and satellite imagery) technology to aid in the understanding of the spatial and temporal dynamics of aquatic environments.

Just before the onset of the COVID-19 pandemic, Whited sat down with Media and Information Manager Ian Withrow to discuss everything from her beginnings in landscape architecture to her experiences researching and teaching in Switzerland. She also provided a behind-the-scenes look at her most recent work analyzing the impact of glacier recession on North American Pacific salmon populations, a research project that recently earned a publication in the prestigious BioScience scientific journal.

Okay, Diane…really appreciate you taking the time this afternoon.

Sure thing. Happy to do it.

I guess it would be best to start at the beginning today: When did you first know that you wanted to pursue a career in the sciences?

I guess that kind of happened toward the end of my undergraduate career at Iowa State, because my undergrad degree is actually in Landscape Architecture

No kidding…so how did you transition to GIS and remote sensing and ecology?

In the program I was in, part of the Landscape Architecture curriculum involved GIS for land use planning, so I was introduced to GIS and over time saw how it related to the natural environment. Along the line, I discovered that I was way more analytical than subjective when it came to the design component of the Landscape Architecture program. From that point on, I kept following a path that was related more to research and the natural environment. At the end of my undergraduate career I actually did a small study in the watershed where I grew up in Iowa. I took water samples and then related the resulting data to the amount of fertilizers people were putting on the cover crops in the area.

Was your interest in GIS from an architecture standpoint then?

No, I would say more ecological. 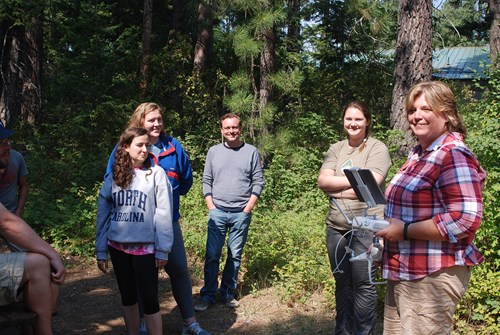 FLBS Researcher Diane Whited (pictured far right) stands with her students during an afternoon of remote sensing instruction during her summer course at the Bio Station.

So when you say ‘GIS’…that’s something that involves a lot of technology use and understanding doesn’t it?

Yeah. I mean a lot of that has come on recently. The use of drones and that kind of thing.

Oh, wow. Deep questions right out of the gate.

Guess I cannonballed right in there, didn’t I?

No, it’s great. I just need to think about that for a second…I guess the technology is just another avenue for me to collect the data we use in our analysis. For example, the drones provide us an easy and flexible platform to collect data when we need it right away.

What do you do when you don’t need the data right away?

We use satellite imagery.

I mean it is and it isn’t. Usually we just call up a provider and say, ‘We need an image over this river at some point in July.’ Then we hope that the weather cooperates and we can get a good image of the area that we’re currently studying. Usually we don’t have too much trouble if we schedule something in Montana during the summer, but I was working on a project recently up in Alaska and British Columbia and the weather was definitely an issue when it came to getting good imagery.

Which is more ideal—drones or satellites?

With satellites, they orbit the earth maybe every seven or eight days. So you’re really at the mercy of the weather. With drones, we can go out, look at the weather and say, ‘Okay, we’re good to fly.’ But the drones only cover a pretty small area. So really, the question we’re attempting to answer determines which platform—satellite or drone—we’re going to use to gather our images.

And once you have the images of a river system, or glaciers, or whatever, what happens next?

Again, it depends on what we’re interested in. For example, I’m working with [FLBS Professor] Bob Hall on a project, and he’s interested in large woody debris in this river environment. So when we get our images, we’ll first extract the water as well as landscape features such as large wood. Then we have an Acoustic Doppler Profiler (ADP) that measures depth and velocity every second, and is also coordinated with GPS. When we apply that to the images we collect from the drones or the satellites with the ADP data, we can create things like depth classifications in our rivers of interest. Does that make sense?

Okay, here’s another example: Say a biologist is out in the Nyack floodplain, right? And they’re sampling the number of invertebrates or fish in a channel of water. If we get an estimate of the amount of similar habitat from our images, say we have X amount of similar channels of water, and we know there’s Y amount of juvenile brook trout per square meter from the biologist’s sampling, then we can get an estimate of the number of juvenile brook trout in each habitat and scale up those estimates throughout the entire river ecosystem.

Is most of your work focused on rivers?

Yeah most of my stuff is river. I do some work on lakes, but it’s primarily river oriented.

Switching gears a bit, you spend time teaching and researching over in Europe, correct?

I do. In Switzerland, specifically.

How did that come about?

I was a Fulbright Specialist in 2016 [an overseas exchange program], which gave me the opportunity to spend some time at ZHAW Zurich University of Applied Sciences where I built relationships, shared knowledge and so forth. One of the things I discovered was that their scientists were utilizing drones in their research. It definitely seemed like something we could implement at the Bio Station so I invested some time in training and learning how to collect and process the data. Now I work directly with Michael Döring, who is a professor at ZHAW, and we alternate teaching drone courses at each other’s institutions. I spend a few weeks in the spring to teach in Switzerland, and then he’ll come and spend a summer teaching at FLBS.

Any big differences that you’ve noticed between the teaching and research in Switzerland versus the U.S.?

It’s actually pretty similar. The class I teach in Switzerland is a master’s level course, so that’s probably the biggest difference. It’s nice for me though, because all master’s level courses are taught in English, so the students have to speak English to pass the class.

Do you ever misspeak, and then just pretend like that’s how we say things in America?

Oh yeah. I’ll say something incorrectly and the students will look a little confused, and I’ll immediately follow it up by saying, ‘Don’t worry about it. That makes sense in America.’ 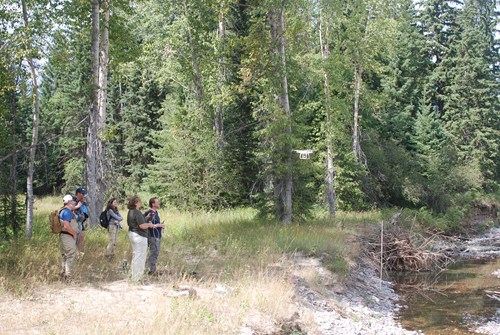 Whited and her students using drone technology to collect data in the Nyack Floodplain outside Glacier National Park.

You were recently a part of a research paper that was published in the scientific journal BioScience.

I was, and it was a really interesting project. The paper provides a conceptual look at the effects glacier retreat will have on western North American Pacific salmon populations over the coming decades.

And how does the future look for those salmon?

Well…I guess I could tell you, but wouldn’t it be better if you read the paper for yourself?

…Fair enough…Okay let me ask you this: Where did the idea for this project come from?

The original conception of this project actually came about a few years ago during a workshop up at Simon Fraser University in Vancouver, British Columbia. I think there was around fourteen of us in attendance, including salmon ecologists, hydrologists, glaciologists, and myself. I was really the only more technical-minded participant, which was great because I was able to bring my skills of spatial analysis to the conversation.

Does this paper help forecast what the future will look like for salmon once the glaciers are gone?

I suppose in a way, but this paper is really more conceptual. We’re actually working on a technical research project right now that will attempt to quantify the amount of habitat that might become available as glaciers retreat and disappear, but even that won’t fully address the entire picture. Glacier retreat and loss is only one component of what might happen in freshwater ecosystems up in the mountains. There are other variables and work, not to mention the impact of climate change on the ocean environment which is another huge component for salmon populations.

So you’re saying that there’s plenty more research to be done?

I’m saying that, when it comes to climate change, we have a lot to learn. Everything we’re uncovering now, it’s just the tip of the iceberg.