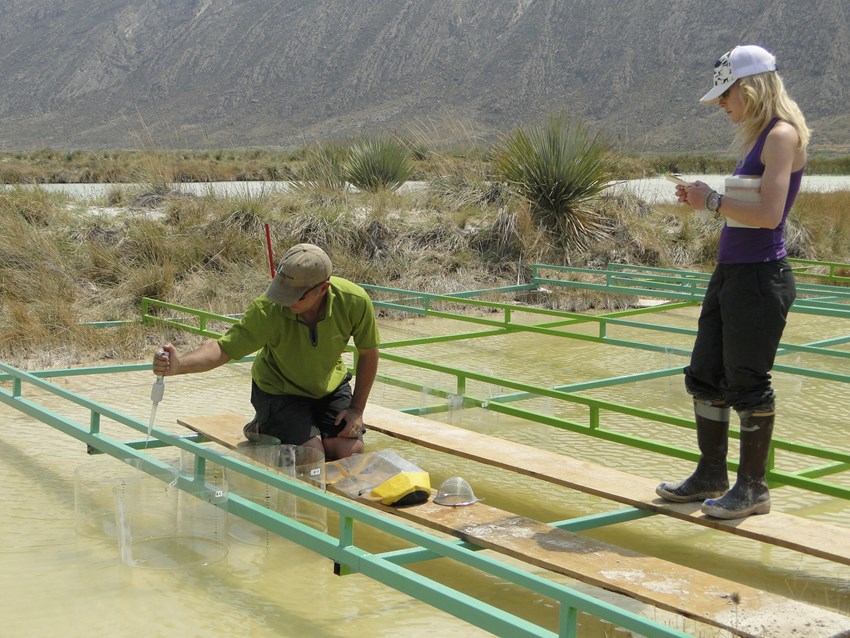 In other words, they were looking to uncover the way organisms evolve here on Earth to cope with “feast or famine” scenarios and determine how this might help understand possibilities for life on other worlds.

“This study is unique and powerful,” said Elser, a senior author on the study. “It takes ideas from the ecological study of large organisms and applies them to microbial communities in a whole-ecosystem experiment. By doing so, we were able, perhaps for the first time, to identify and confirm that there are fundamental genome-wide traits associated with systematic microbial responses to ecosystem nutrient status, without regard to the species identity of those microbes.”

The study was conducted in a shallow pond located in the Cuatro Ciénegas Basin of Mexico—an area so poor in nutrients that many of its ecosystems are dominated by microorganisms descended from ancient marine ancestry.

This absence of nutrients, combined with the microorganisms at play, made the Cuatro Ciénegas Basin an ideal choice for researchers looking to study and understand how life may have existed on other planets in our solar system. In fact, researchers believe that the ecosystems that exist in this region may be similar to ecosystems from early Earth and, potentially, the past environments of Mars as that planet lost its surface water.

From a physiological standpoint, microorganisms are incredibly diverse. They possess vastly different genomic features and mechanisms that they use for to persist and reproduce.  These features form their life strategies and determine to some extent their population dynamics and distributions in the environment. 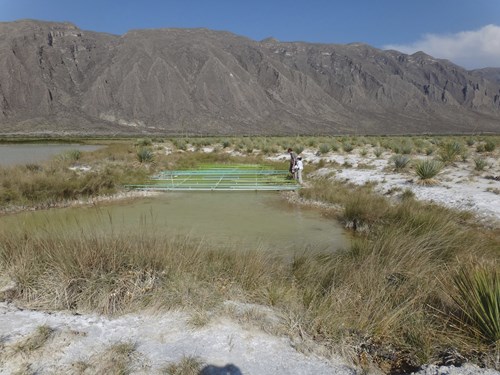 The Lagunitas Pond, where the study took place, is located in the Cuatro Ciénegas Basin of Mexico.

Engaging in one of the first ever whole-ecosystem experiments involving replicated metagenomic assessments, Elser and his fellow researchers began by installing mesocosms, or miniature ecosystems, to create a control group. They then added a solution rich in nitrogen and phosphorus—the main ingredients of fertilizers—to the pond itself and observed how that nutrient-rich feast affected the pond’s microbial community.

For the next 32 days, the researchers conducted field monitoring, collected samples, and analyzed water chemistry. Whole mixed microbial communities from both fertilized and unfertilized conditions were collected and examined to determine how they changed in response to the additional nutrients, focusing on the ability of the microorganisms to process biochemical information within their cells.

Ultimately, in a paper published in the journal eLIFE, the scientists reported that their hypothesis had been correct: A suite of genomic traits affecting the rates and costs of biochemical information processing were responsible for which species did best under the experimental “feast” that they applied.

This means that, no matter where they are located or which particular taxa are involved, microorganisms have to have information-processing machinery that is fine-tuned to the key resources provided to them from their surrounding environment

To put it another way: There are rules of life of “feast and famine” that should be generally applicable to life on Earth and, just maybe, beyond.