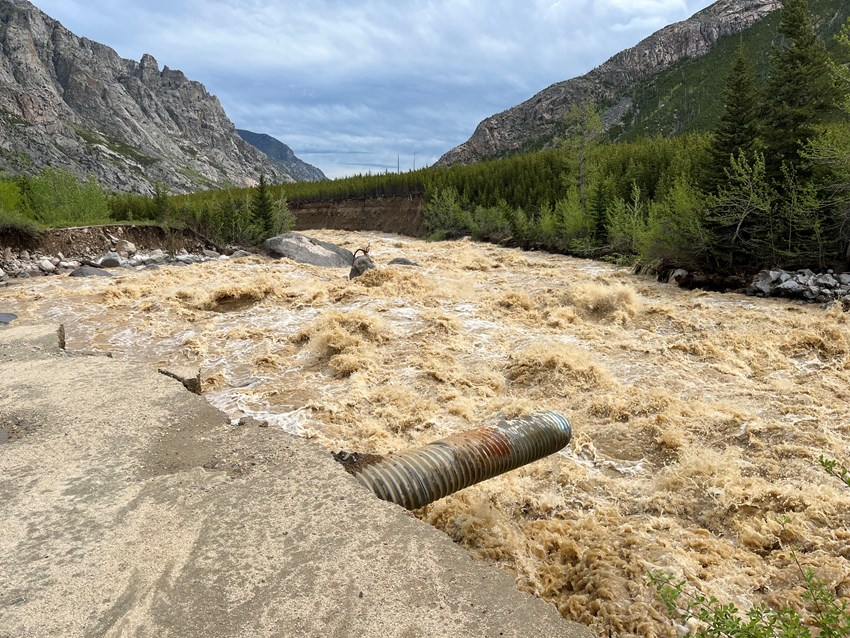 June 14, 2022, East Rosebud, Montana — Cindy Johnson, her husband Mark, and their 11-year-old yellow lab Sadie have been living at their cabin outside of Red Lodge for four days now without power. The couple has been completely isolated due to intense flooding in East Rosebud Creek. The rain came fast in the days before.

“The rain up there usually comes in storms,” Johnson said. “It doesn't usually just rain for three days straight. Things felt generally weird all around.”

Suddenly, the water came—fast and filled with so much debris that the creek’s banks could do nothing to contain it. Not only did the bridge leading back to civilization break, but the road itself was washed away. The National Guard was spread too thin and could only prioritize evacuations in areas where food stores were being depleted. The Johnsons, along with about 60 others, were trapped.

Now, with no end in sight, the Johnsons and their neighbors in the sparse summer cabins meet up to inventory food, generators, gasoline, and anything else they might need to survive.

Suddenly, a fleet of Black Hawk helicopters sounds off over the horizon. Due to the presence of a medically-compromised individual down the way, the Johnsons and their neighbors have ten minutes to pack what they need and get out. After quickly throwing the important things in a bag and hoisting Sadie into the helicopter, they leave their car and their cabin behind for what will likely be two years at least.

Over a month later, Cindy and Mark return to East Rosebud Creek. Where a bridge once spanned 20 feet from bank to bank, there is now a 100-foot-wide crack in the earth.

“It just smelled like soil,” Cindy said. “It didn’t smell like water or anything. It was just the soil.”

It’s been a tumultuous summer for Montana in terms of water. While the area in the Missouri River Basin has been undergoing prolonged drought, Southern Montana’s Yellowstone River Basin (where East Rosebud Creek is) had a 500 year flood event.  And our backyard in Northwest Montana and the Flathead was only a few temperature degrees away from our own historic flooding.

In the wake of so much disaster, collecting baseline data through watershed monitoring has become more and more important.

In Red Lodge, the Rock Creek Watershed Group is a brand new organization that had already started monitoring Rock Creek, another stream in the Yellowstone River Basin, when they experienced drastic flooding of their own.

“Our upper monitoring site was at a bridge, and now it's at a big steep cliff,” said Ben Bailey, a founding member of the group.

The Rock Creek Watershed Group’s monitoring program was able to be established thanks to scientific guidance and funding from a fairly new program at the University of Montana’s Flathead Lake Biological Station. Funded entirely by PlusFish Philanthropy, the group known as Monitoring Montana Waters (MMW) supports local watershed groups by providing training, gear, and up to $6,000 for laboratory analysis for groups interested in conducting a water monitoring program for their local rivers, creeks, and lakes.

“This flood has really shown the need for a watershed group,” Bailey said. “It kinda makes us wish this group was around doing stuff for the last few years instead of trying to establish now in this crisis, but better late than never, I guess.”

The Rock Creek Watershed Group is the easternmost program MMW has funded thus far as the FLBS group based on Flathead Lake ultimately aims to provide assistance to watershed groups across the entire state. Flooding and drought offer a grim reminder that water monitoring will only become more important in the coming years.

“It's always, always important to have baseline data, even without a disastrous event occurring,” said Rachel Malison, the program manager of MMW. “If you don't have any baseline data to show you what the condition is now, you won’t really know if you start in 10 years if it’s different — if it's gotten worse, or if it’s gotten better.”

Established in 2020, MMW assisted seven organizations in 2021. In 2022, MMW is working with and providing funding for nine watershed programs.

The Big Hole River Foundation in Dillon, MT, is in its second year of funding from MMW.

“Our goal in starting the [water monitoring] program is to have good data, and help inform good management decisions,” said Brian Wheeler, the executive director of the foundation.

Because it has been around since 1988, the Big Hole River Foundation was important  in helping to guide how exactly MMW would function and best help the watershed groups on the ground.

“We were able to help Rachel as she worked to kind of design the project,” said Wheeler. “We helped her understand what small watershed groups were going through as they were trying to get one of these water quality monitoring programs off the ground. In that, we were kind of mutually helpful.”

Beyond just funding and lab analyses, Wheeler says the most useful aspect of MMW is the expertise Malison and the other members are able to provide.

The Kootenai Watershed Allies were just established this year. After receiving guidance and funding from MMW, the five volunteers that make up the organization were able to begin monitoring 32 different sites in the Kootenai River Basin. The founder Rita Adams is incredibly thankful to MMW.

“We live and work on the Kootenai River,” Adams said. “MMW gives us the great opportunity to be able to participate in gathering data to hopefully ensure better care of our water. It's our life”

MMW isn’t the only organization that provides assistance and funding to watershed monitoring groups. Montana’s Department of Environmental Quality Volunteer Monitoring Program has similar goals and application guidelines as MMW, and the Montana State University Extension Water Quality Program also supports and funds groups. Malison calls them the “three legs of the stool that provide support” to small watershed groups.

Applications for MMW funding are due by March 1, 2023, and application outcomes will be released by April 1. However, an approved Sampling and Analysis Plan is required in order to receive funding, so Malison encourages interested organizations to submit their SAPs by February 1 to give the board time to fully consider the plans.

Both MMW members and participants from groups that receive MMW assistance are firm in the importance of watershed monitoring programs.

“I don't think there's a single water body in the West today that you could say is not impacted by human factors, whether it’s mining-related or climate change or whatever,” Adams of the Kootenai Watershed Allies said. “It’s hugely important for all of us across Montana to keep an eye on the things that are threatening our riparian ecosystems.”

However, most are confident in the public’s ability to come together over important issues, like water.

“It's really a good sign to see the local folks coming together and seeing that there's going to be issues,” said Bailey of the Rock Creek Watershed Group. “The Rock Creek group is mostly irrigators. They're saying, ‘Hey, there's not going to be any more water in the next 10 years. What can we start doing now?’ … They live here. They're concerned. Seeing that people kind of come together and coalesce around a river is good.”

Thanks to their relationship with MMW, Wheeler of the Big Hole River Foundation says they can “reach out to everybody and say, ‘This is what the science says. Now let's fix it.’ There's an opportunity there. It doesn't have to be a battle. We all benefit when the rivers are healthy.”