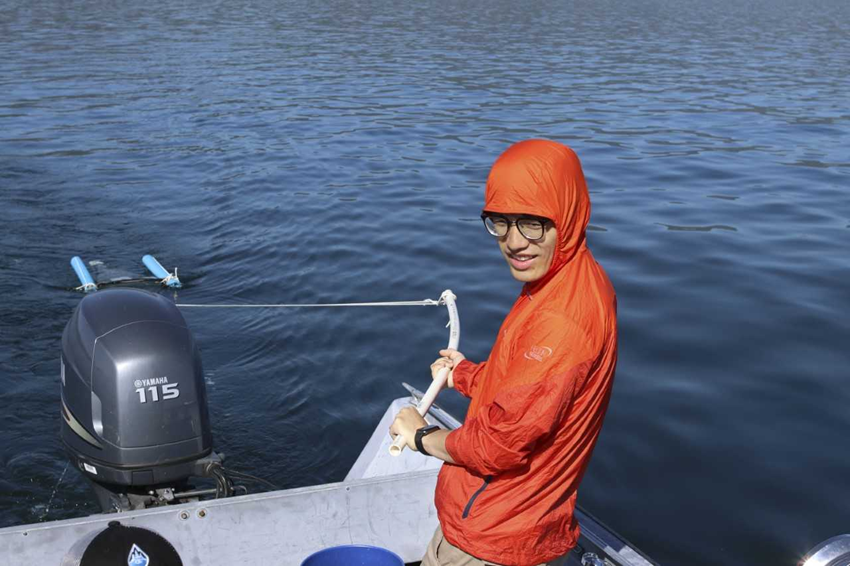 Each year, scientists estimate up to four million tons of plastic debris are transported from rivers to oceans all across the globe. It was long thought that most microplastics found in river systems would eventually make their way into the oceans. However, new research by scientists at the University of Montana’s Flathead Lake Biological Station has determined that more microplastics are retained in river systems than previously thought, and river export to the oceans might be overestimated.

The research was conducted by visiting FLBS researcher Xiong Xiong from the Institute of Hydrobiology at the Chinese Academy of Sciences, a small team of Chinese collaborators and FLBS director Jim Elser. It focused on the occurrence and fate of microplastic debris in the middle and lower reaches of the Yangtze River in China.

China is considered one of the largest contributors of plastic waste due to its high population density and extensive use and incomplete management of plastic materials. The Yangtze River, one of the largest rivers in the world, is believed to be the largest plastic-export river to the ocean in all existing scientific modeling studies.

Collecting samples from 15 sites along a 1,700-kilometer stretch of the Yangtze, the researchers found that not all microplastics generated along the river appear to be transferred to the sea. Rather, it appears that microplastic densities in the Yangtze are impacted by the river’s proximity to large cities, lakes and man-made structures such as dams. Additionally, a portion of microplastics are likely deposited in sediments along the bottom and shoreline of the river.

The results, which run counter to current estimates regarding river export of microplastics, are significant. They indicate that river systems are at great risk for microplastic pollution, and that efforts should focus more on monitoring river contributions to the ocean and their potential impacts to the rivers themselves. They also indicate that previous estimates of microplastic export from the Yangtze River may be overestimated.

Currently, Xiong is bringing that kind of focus to western Montana, where he’s performing a similar research project to assess microplastic concentrations in the Flathead Lake watershed. His Flathead research began in the summer of 2018, and he hopes to release his findings later this spring.

Results from the Yangtze River study, meanwhile, were recently published in the scientific journal Science of the Total Environment. The Yangtze study was supported by the Natural Science Foundation of China, State Key Laboratory of Freshwater Ecology and Biotechnology, and Young Researcher Support Funding of the Institute of Hydrobiology, Chinese Academy of Sciences.