Stopping invasive species from destroying ecosystems and regional economies is among the world’s greatest challenges. Now, thanks to a grant from NASA, an investigative team of researchers at the University of Montana Flathead Lake Biological Station is launching a new project enabling officials to predict the spread of aquatic invasive species (AIS) through remote sensing, genetic monitoring and climate forecasting. 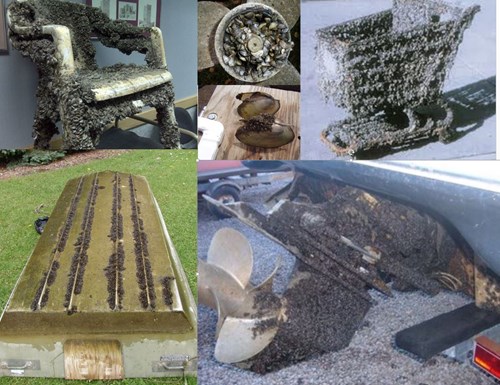 These images reveal the devastating impacts invasive mussels can bring to a body of water.

This is not just an environmental issue. Nonnative and invasive species in the United States currently cause economic losses totaling more than $125 billion each year. In Montana, zebra mussels alone are predicted to cost $234 million a year in mitigation costs and lost revenue, according to a report conducted by FLBS research economist Nanette Nelson.

“The goal of our project is to increase early detection of AIS,” said Gordon Luikart, a FLBS renowned researcher and the driving force behind the grant. “We want to provide managers with the most informative and accurate tools as possible, so they can increase their odds of early detection and reduce spread in cost-effective and efficient ways.”

One way the project aims to do this is through developing web-based software that will integrate existing long-term observational AIS databases. This integration will include information that currently exists in a United States Geological Survey database with observations submitted by state and government agencies across the country. The project will provide software and forms to assist agencies in this process.

Additionally, the project will establish the first national environmental DNA database. More sensitive and less expensive than traditional field surveys, eDNA can be used almost like a blood test to detect health issues such as parasites or cancer. While it may not always detect the exact location of AIS, monitoring for eDNA does indicate whether an AIS presence is likely nearby. This information can enhance decision-making, allowing officials to direct resources, conduct more extensive efforts in more efficient ways to find and potentially eradicate or prevent spread of the AIS.

“If you think of a water body as a human body, then it’s easy to imagine aquatic invasive species as a type of aggressive cancer,” Luikart said. “The earlier you’re able to detect it, the greater the odds you’ll be able to eradicate it before it has the opportunity to spread to more vital areas. But if invasive mussels, for example, go undetected and have a chance to metastasize, if they invade a lake and infest, then the body of water and everything downstream will be lost or changed forever.”

That’s why early detection is the key. Once up and running, these observational and eDNA databases will be used alongside NASA climate warming data to map and predict the spread of AIS within and among water bodies. Officials also will be able to use the data to identify areas with the highest potential for future AIS invasion, allowing them to start taking steps toward prevention as early as possible. The collaborative project is made possible with extensive help and support from several state and federal agencies, including Montana Fish, Wildlife and Parks, the U.S. Geological Survey, NASA and the U.S. Forest Service.

“We’re very fortunate to be able to work alongside these agencies on this project and so many others,” Luikart said. “The U.S. Forest Service and FWP have been incredible partners, and we’re eager to do everything in our power to sustain our water systems for as long as we can.”