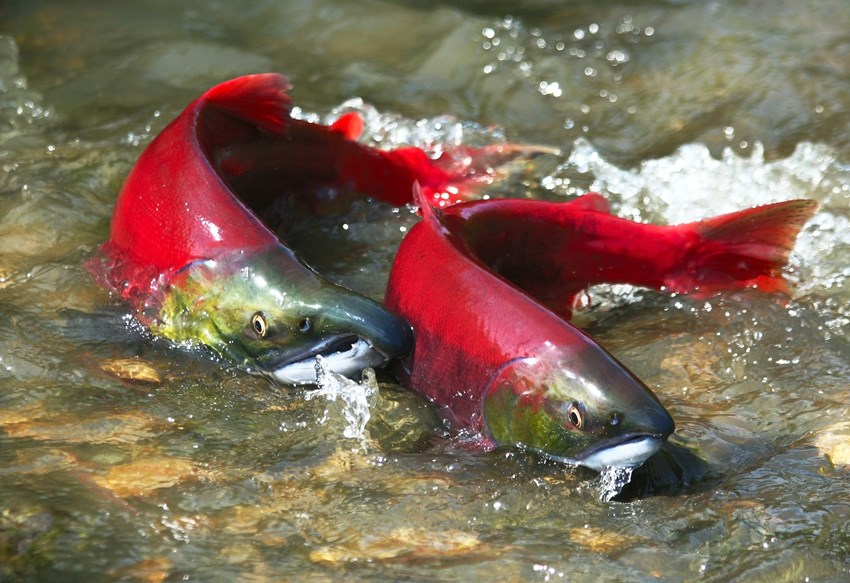 For decades, climate change has had detrimental impacts on Pacific salmon populations. Spawning streams are overheating and droughts are drying up salmon habitats entirely, impacting many food webs from the Rocky Mountains and Coast Ranges to the Pacific Ocean. But in a new study led by Simon Fraser University (SFU) researchers, Flathead Lake Biological Station research scientist Diane Whited and a team of scientists have discovered that the warming trends may offer one silver lining for salmon populations, if only for a while.

Recently published in Nature Communications, the study revealed that the retreat of glaciers in the Pacific mountains of western North America could potentially produce more than 6,000 km of new Pacific salmon habitat by the year 2100.

“Climate change alters the shape and dynamics of stream ecosystems,” said Whited, whose role in the study focused on spatial modeling of potentially accessible stream habitat once glaciers have receded. “This information is crucial for managing the future of salmon habitat and productivity.”

Researchers modeled glacial retreat under different climate change scenarios. To accomplish this, they used computer models to peel back the ice of 46,000 glaciers between southern British Columbia and south-central Alaska to look at how much potential salmon habitat would be created when the underlying bedrock is exposed and new streams flow over the landscape.

According to the researchers, desirable stream habitat for salmon is connected to the ocean, maintains low-gradient slope of 10% or less, and has retreating glaciers at its headwaters. By the end of the study, the researchers found that three hundred and fifteen of the glaciers examined could fit those requirements.

Under a moderate climate scenario, the loss or reduction of those glaciers may reveal around 6,150 km of potential new salmon habitat throughout the Pacific mountains of western North America by the year 2100. That’s a distance nearly equal to the length of the Mississippi River.

The researchers caution that while the newly created habitat may be a ray of light for salmon in some locations, overall climate change poses grave challenges for salmon populations. Additionally, if current warming trends continue, the newly emerging salmon habitats would eventually overheat and ultimately disappear the same way that current salmon habitats are today.

“On one hand, this amount of new salmon habitat will provide local opportunities for some salmon populations,” said SFU spatial analyst Kara Pitman, the lead author on the study. “On the other hand, climate change and other human impacts continue to threaten salmon survival—via warming rivers, changes in stream flows, and poor ocean conditions.”

For the complete study, visit the Nature Communications website at https://www.nature.com/articles/s41467-021-26897-2