Getting Clarity on Montana Turtles 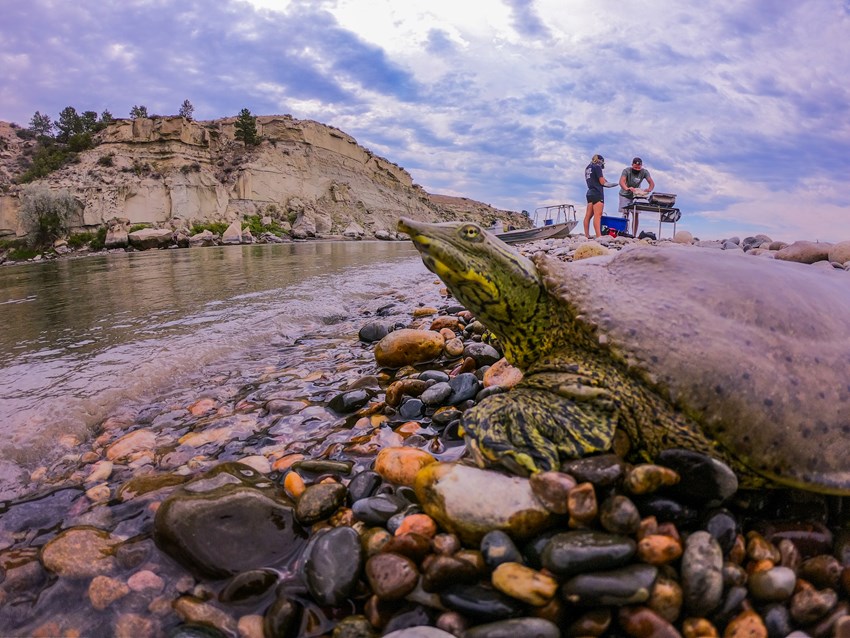 A Clarifying Issue: Getting the Full Story on Montana's Turtles

When it comes to invasive and nonnative species, it can be easy to assume that the invading species in question originated in some other area of the country, if not the world. After all, some of the most prominent invading threats to Pacific Northwest and Rocky Mountain ecosystems, including the Flathead Watershed, are from the far side of the globe. Take the invasive zebra mussels of Russia and Eastern Europe, for example, or the giant hornets from Southeast Asia.

But what if a nonnative species does not come from thousands of miles away? What if a species is native to one ecosystem and an invader to another ecosystem within the same state, often with only a mountain range or the Continental Divide between them?

These questions aren’t hypothetical. This issue exists in Montana, right here in the Flathead Watershed, and it highlights a very important topic when discussing the already complex invasive species narrative: The delicate balance of an ecosystem can be razor thin, as can the line between native species and invasive species. One high profile example is Flathead Lake’s lake trout, which are nonnative in the Flathead Watershed but native in the adjacent St. Mary’s Watershed. Or the American bullfrog which is now found in many parts of Montana but considered nonnative.

Another example is snapping turtles. Nearly a decade ago, scientists at Rocky Mountain College (RMC) in Billings, Montana launched an ambitious long-term study of native river turtles in eastern Montana through the RMC Yellowstone River Research Center (YRRC). The YRRC is a multidisciplinary research institute composed of geologists, wildlife biologists, geographers, and social scientists at RMC. 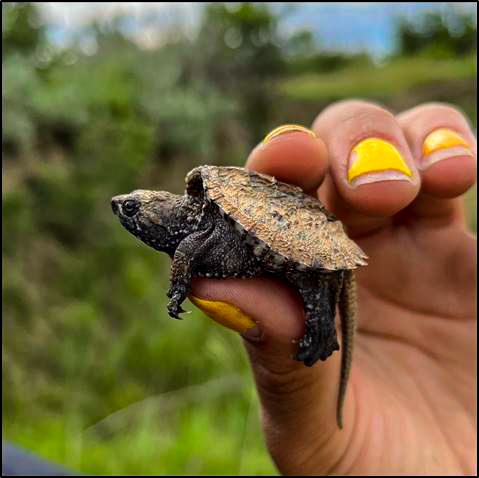 A rare discovery of snapping turtle hatchling in eastern Montana, where more than 70% of all turtle nests/eggs are eaten by predators. Photo pr0vided by the Yellowstone River Research Center.

Led by RMC associate professor of Environmental Science Kayhan Ostovar, the YRRC’s Snapping and Spiny Softshell Turtle Long-Term Monitoring Program focuses on the role that these two native eastern Montana turtle species play on the integrity and health of the Yellowstone River and other aquatic systems in eastern Montana.

These two species—the spiny softshell turtle and the snapping turtle—are considered species of concern in eastern Montana due to a lack of knowledge about their current status and potential threats to populations. By better understanding the distribution, status, and threats to these turtles, researchers are better equipped to help inform efforts by Montana Fish, Wildlife & Parks and tribal agencies in managing and sustaining both species.

“Across the world turtles are declining at alarming rates due to habitat loss, climate change, and overharvesting for human consumption,” Ostovar said. “As a species with long-lived individuals the loss of only a few females in a population can have serious demographic effects on population persistence.”

Ostovar said his team spent the first few years of their research understanding the distribution of these two species in the prairie ecosystems of southcentral Montana, and are now focusing on learning which habitat features are important for hibernation and nesting, as well as understanding potential sources of mortality from automobiles, loss of essential habitat, and changes to natural river dynamics due to dams and irrigation infrastructure.

Montana only has three native turtle species, and there is only one turtle native to western Montana—the painted turtle, which the Confederated Salish and Kootenai Tribes work tirelessly to protect against the dangerous Highway 93 traffic that roars through the Ninepipes Wildlife Refuge each year. It’s true that one might occasionally see a box turtle or a red-eared slider, likely escapees from classrooms or released pets, but they are both nonnative turtle species. 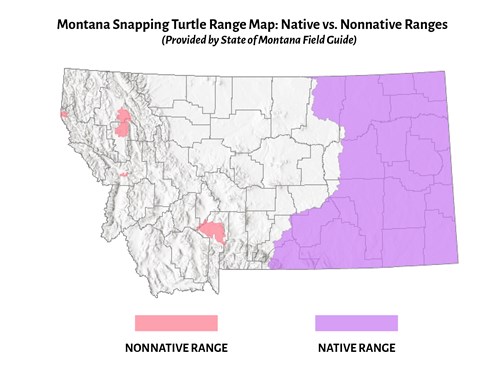 This map depicts the native (purple) and nonnative (pink) ranges for snapping turtles in Montana. Map provided by the State of Montana Field Guide (https://fieldguide.mt.gov/speciesDetail.aspx?elcode=araab01010).

Although red-eared sliders were once common in pet shops, they are now illegal to sell in Montana. Additionally, it is illegal to dump aquarium pets into waterbodies, but unwanted aquarium pets are still repeatedly released into natural waterways. These releases usually occur near urban areas and can result in long-term negative impacts. Red-eared sliders are sometimes found by Ostovar’s research students at their study sites in native ecosystems.

Meanwhile, on the western side of Montana’s Continental Divide, researchers from Montana Fish, Wildlife & Parks and members of the Montana Conservation Corps have recently launched a turtle-related project of their own.

A new turtle—new to western Montana, at least—has emerged in ponds and lakes west of the Divide. It’s the snapping turtle, the same species that Ostovar and his team are working to sustain in its native range of central and eastern Montana.

Assuming to have crossed the Divide and entered western Montana with human assistance, there is now concern that snapping turtles may cause harm to native populations of other pond-dwelling species such as frogs, painted turtles, snakes, ducks, and fish.

So, on one side of the state, Ostovar and his students are conducting important work monitoring and researching snapping turtles in their native prairie ecosystems of central and eastern Montana, where the turtles are critical indicators of water quality and ecosystem health.

At the same time, on the other side of the state, managers and researchers are working to trap and remove snapping turtles from their nonnative mountainous ecosystems west of the Divide, where there is concern that they could change the delicate ecosystem balance in these mountain streams and lakes.

Here is the fine line between native and nonnative species, and a potent example of how delicate ecosystems can be, regardless of their proximity to one another. 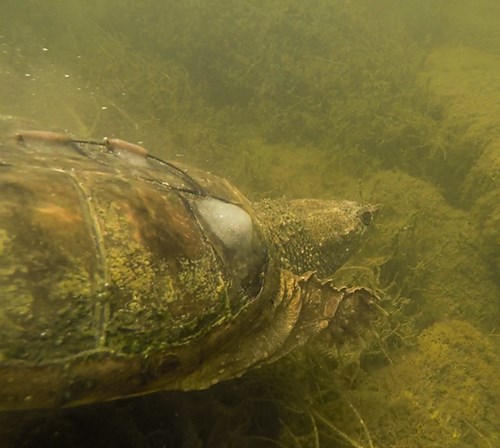 “Invasive species are one of the leading causes of global biodiversity decline,” said Ostovar. “Control works best early in the process of their discovery in a new ecosystem before populations become well established.”

Ostovar emphasizes that the distribution of native snapping and spiny softshell turtles on the Yellowstone River ecosystem likely doesn’t extend much further west than Columbus, Montana.  Researchers have identified what appear to be healthy populations of turtles in some rivers and streams, but also documented sites with good habitat but only have small populations or skewed demographic distributions. This can indicate mortality of certain age classes or issues with reproduction or juvenile survival.

Similar to the painted turtles in western Montana, automobiles are a leading source of mortality for all Montana turtles. Turtles are also unintentionally caught on fishing hooks and a number of life-threatening injuries have been documented from these incidents. RMC students and scientists have additionally observed adult turtle mortality in unscreened large diameter irrigation pipes, which has the potential to quickly reduce adults in a localized population.

“Every year we receive calls from people who have successfully released turtles they unintentionally caught while fishing,” Ostovar said. “If you catch a turtle with a tag please call the number below so we can learn more about their movements and survival. Also, if you do use irrigation pipes, please attach one to two inch screens on those pipes.” 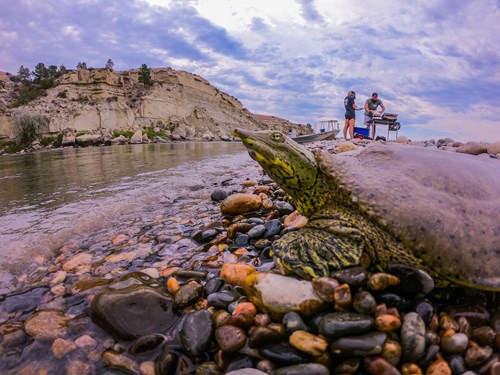 Anyone who captures a turtle with an RMC tag, sees one hit by a car on a road (they can often be nursed back to health),  or just wishes to know more about spiny softshell or snapping turtles in central and eastern Montana, please contact RMC associate professor Kayhan Ostovar by phone at 406-657-1175 or email at kayhan.ostovar@rocky.edu.

You can also follow Ostovar’s students on Instagram (@yellowstoneturtles) and read more about student research projects by visiting the Yellowstone River Research Center website at http://yellowstoneriver.weebly.com

Anyone sightings of snapping turtles in northwest Montana should be directed to Montana Fish, Wildlife & Parks wildlife biologist Jessy Coltrane at 406-751-4584 or by email at jcoltrane@mt.gov.