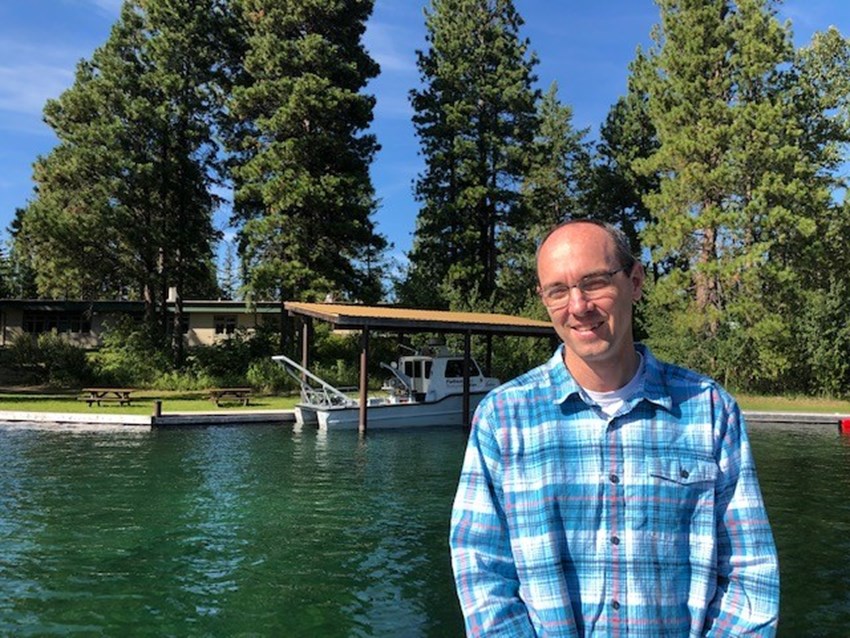 The middle of our oceans are filled with vast systems of rotating currents known as subtropical gyres. These regions occupy 40 percent of the Earth’s surface, and have long been considered to be remarkably stable biological deserts, with little variation in chemical makeup or nutrients needed to sustain life.

However, there exists a strange anomaly in the North Pacific Subtropical Gyre ecosystem that has puzzled scientists for years. In this region that occupies the Pacific Ocean between China and United States, the chemistry changes periodically. There’s a particularly notable fluctuation in the levels of phosphorus and iron, which affects the overall nutrient composition and ultimately impacts biological productivity.

In a new study published in the Proceedings of the National Academy of Sciences, FLBS researcher Matthew Church joined Oregon State University’s Ricardo Letelier, University of Hawaii’s David Karl, and a group of fellow scientists to uncover the reason behind these variations in the North Pacific Subtropical Gyre ecosystem.

“Variations in ocean-climate appear to regulate iron supply, which alters the types of plankton growing in these waters, which ultimately controls ocean nutrient concentrations,” Church said. “My laboratory has been working on questions related to the role of plankton in controlling ocean nutrient availability for many years and this study places much of that work in context. As a result of sustained, long-term observations, this works confirms how tightly coupled plankton biology is to the supply of nutrients, specifically iron, delivered from the atmosphere.”

Utilizing three decades of observational data from Station ALOHA, a six-mile area in the Pacific Ocean north of Hawaii dedicated to oceanographic research, the team discovered that the periodic shift in iron levels are the result of iron input from Asian dust, accounting for the chemical variances and providing varying amounts of nutrients to sustain life.

The key to the variance is the Pacific Decadal Oscillation (PDO). PDO is an ocean-atmosphere relationship that varies between weak and strong phases of atmospheric pressure in the northeast Pacific Ocean.

In years when the low pressure weakens in the northeast Pacific, winds from Asia become stronger and move in a more southern direction. This brings more dust from the Asian continent, “fertilizing” the ocean surrounding Station ALOHA. When the pressure strengthens, the opposite occurs.

The supply of nutrients is a fundamental regulator of ocean productivity, and phosphorous and iron are key components for life. Typically, the ocean’s upper water column is fertilized by nutrient-rich water mixing up from the deep. This is a difficult process in the North Pacific Subtropical Gyre ecosystem because the waters are very stratified and little mixing actually takes place.

When strong Asian winds bring in significant amounts of iron, organisms are allowed to grow and utilize phosphorus in the upper layers of the ocean. When Asian winds weaken and iron input is reduced, organisms are forced to return to a deep water mixing nutrient delivery system. This creates the periodic ebb and flow of iron and phosphorus levels in the North Pacific gyre.

According to Church, the findings from this study emphasize the critical need to include both atmospheric and ocean circulation variability when forecasting how climate change might impact ocean ecosystems.

“It reaffirms the need to think about how tightly connected plankton biology is to changes in climate, and ultimately also to changes in land use which can directly impact dust supply to the sea.”

As Earth’s temperature continues to warm, researchers expect to see long-term changes in wind patterns across the North Pacific. The evolution of land use and pollution driven by human activity in Asia will also affect the sources and magnitude of iron and other nutrients carried by wind across the ocean.

Further research is needed to better understand how these changes will ultimately impact ecosystems in this ocean region, as well as others around the world.