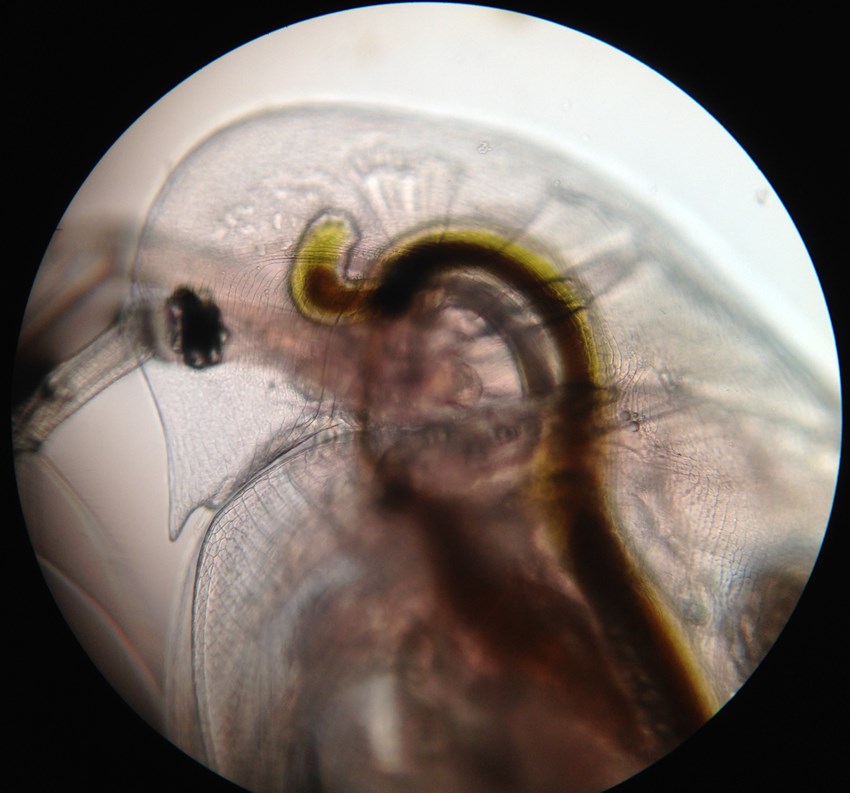 It’s on a cold but otherwise unremarkable Wednesday that our dear little Daphnia is born: A water flea the size of a sharpened pencil tip, no bigger than a millimeter or two, emerging defiant and unshaken in the winter waters of Flathead Lake.

She looks exactly like her mother. An exact clone, in fact, most notably in the structuring of her single compound eye. No sign of her father, of course, and why would there be? Daphnia’s never had one. Her mother reproduced asexually, creating genetic copies of herself, as these water fleas tend to do, when environmental conditions are favorable and there’s an ample supply of food.

Throughout her childhood, Daphnia quickly learns to utilize her antennae, two branch-like structures growing from her “head,” to dart back and forth through the water. A third antenna, much smaller than the others, she uses to sense and avoid predators. She feeds upon algae particles and the occasional bacteria, and hears cautionary tales about the monstrous Mysis shrimp that rise in the darkness of night to devour those naughty little water fleas that fail to follow the rules.

Does she realize she and her fellow water fleas are vital to the health of the lake in which they reside, acting as a biological barrier against smothering algae blooms and serving as the very foundation of the regional food web? Probably not. Daphnia is on her way toward a simple life. She’s content and—as she begins to molt and grow—is soon fixated on creating genetic copies of her very own.

Then, one day, everything changes. A February front moves in, and even beneath the surface the water grows intolerable and cold. Oxygen levels tumble, and food particles all but disappear. Daphnia has always been unashamedly and literally transparent. Like all water fleas, her body and outer shell are translucent, meaning that her internal processes—from digestion to heartbeat—are plain to see. So when her surroundings become inhospitable, her transformation is visible and her maternal imperatives shine through.

She turns a Valentine red as she stockpiles hemoglobin to account for waning oxygen levels, and begins developing eggs with a thick outer coating to reinforce them against the outside world. No longer incubating her clones alone, these eggs will now include male water fleas, which when hatched will reproduce with the next generation of females to ensure genetic variation and increase the chances of the species’ long term survival.

Does she fear that her life will go by unappreciated? Does she wonder if future generations of water fleas will ever know it was all for them? Probably not. Her aim is survival and her intentions are bold. Her movements may become frantic as she flees from predatory shrimp and fish, scavenging for food, desperately searching for the nutrients her offspring require.

She carries on, as mothers always do: An embodiment of life’s fragility and resilience, heart open to the world, the giving of herself unyielding and complete in the hopes of a better tomorrow for her children and the place she calls home.