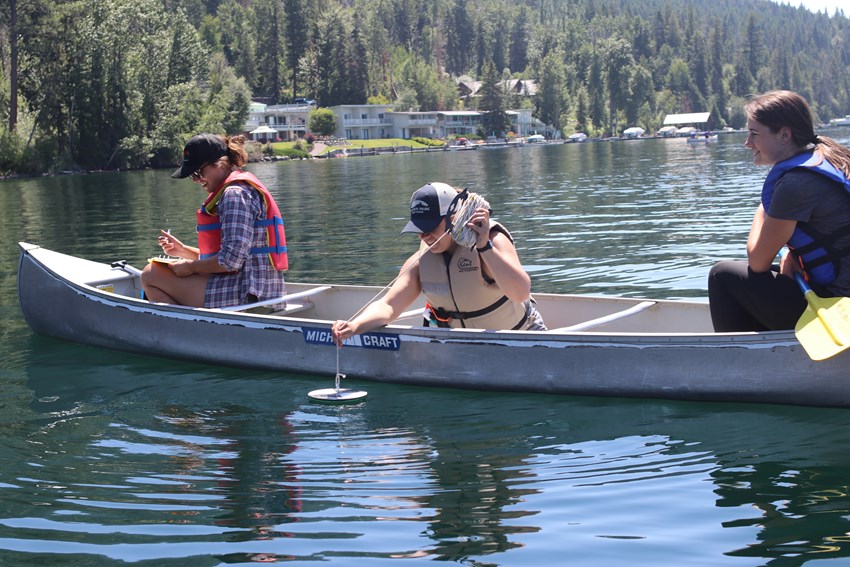 Shawn Devlin stands on the deck of a motor boat that’s floating gently on the glass-calm water of Flathead Lake. He’s facing a group of lake ecology students in canoes. On this gleaming summer day, he’s teaching his class how to take a secchi disk reading. A secchi disk looks a little like a black and white Frisbee golf disk tied to a rope, but it’s really a tool that scientists use to tell how clear the water is in a lake.

This July, Devlin, a researcher at the Flathead Lake Biological Station at Yellow Bay, has partnered with the Flathead Lakers, a local non-profit organization to start a citizen science project. The project is called the “Flathead Lake Secchi dip-in.” Twenty-five community members signed up to take a secchi reading and a water sample from different locations around the lake. Devlin’s students are also involved in the dip-in, and will be gathering data as well. The project is engaging members of the community to help put together a more holistic view of water clarity in the lake, which tells scientists a lot about water quality.

The Flathead Lake dip-in coincides with the national secchi dip-in that was started in the 1990’s. The national program uses citizen scientists during the month of July to track water quality trends in lakes all over North America. The data is entered into a large database. Although Flathead Lake has unique water clarity and quality, not a lot of data from the lake has been entered into the national database.

Devlin wants to change that. He is in charge of the long-term monitoring program that has been going on since the late 1970’s in Flathead Lake. The researchers have taken regular secchi disk readings every two weeks at one spot on the lake called mid-lake deep. They don’t have enough people to keep track of other areas in the lake. By enlisting citizen scientists, Devlin hopes to get way more secchi readings than he can with his crew of researchers, and gain a broader picture of what’s going on with water quality around the lake.

The national trend in lake water quality is declining, but Flathead Lake appears to be keeping clean. The last forty years of secchi data at the one monitoring location show no downward trend in clarity. However, without data on different locations, it’s hard to tell the overall health of the water. The lake’s heart could be beating strong at mid-lake deep, but it could have a gangrenous arm somewhere else. The bio station is hoping to rely on its new small army of citizen scientists to find out.

“If I don’t know the variability around our long term dataset, it’s less powerful than if I have some idea of how representative those data are of the whole lake,” says Devlin.

Devlin and his wife Hilary, who is the education outreach coordinator for the Flathead Lakers, were surprised by the positive response from the community. They didn’t expect to get nearly as many interested people in the first year. They got funding from the Polson Community Foundation and private donors for the project.

“I think one of the biggest things that has really surprised Shawn and I is that this community is really passionate about the lake, and they’re willing to get their hands wet and dirty to protect it. I think that’s really cool,” she says.

The long-term trends from yearly dip-ins will be the most valuable for researchers.

“We hope to do this long term, annually. We could see problems as they pop up before they’re a huge problem, and actually be able to do something about them,” says Hilary.

The Flathead Lakers have wanted to start a citizen science program for years, and Lakers board member Jeff Tuttle was a real force in getting the project started. Hilary Devlin says this kind of project was the perfect level of investment for citizen scientists.

“That’s the biggest thing with the citizen science program is making sure you’re collecting important data, good data, quality data and still have it be easy and fun,” she says. “The secchi disk has been around for so long that it’s one of those straightforward, everybody-can-do-it kind of things.”

To use a secchi disk you lower it straight down into the lake and watch as it sinks down through the water column until it goes out of sight. Then you bring it back up until it just comes back into view. The rope is marked with meter increments to show how far down the water clarity extends.

Several training days are held at the biological station before the dip-in to make sure people are comfortable with how to use the disk.

The third level of membership adds a water sample to the package. A participant can pay 100 dollars to get their secchi disc, and a water sample. The lab results of the sample tell people calcium levels that indicate how susceptible their area of the lake may be to invasive mussels, and other water quality parameters.

On July 19, FLBS partnered with the Big Sports Academy Girls Track and Field Camp to participate in the dip-in. The Big Sports Academy is a locally-owned organization that works to foster and develop balanced young people through a holistic approach to athletic and leadership development. 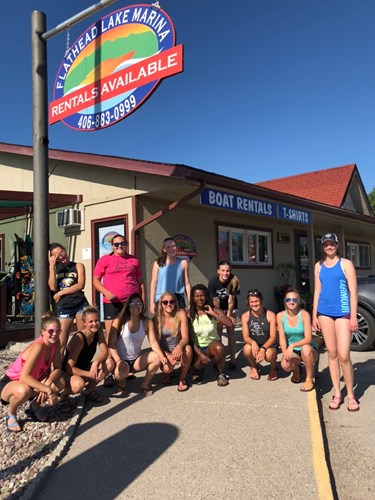 BIG Sports Academy campers take time for a quick photo at the Flathead Boat Company after participating in the 2018 Flathead Secchi Dip-In.

“We’re an athletic camp, but we also really want to promote a mindset that goes beyond the competition and connects our athletes with local communities and the environment,” said camp director Melinda Withrow. “The dip-in was a really fun way for us to do that, and to do something significant for such a beautiful place.”

One water sample was collected, which will be tested to determine nutrient and calcium levels in the lake water, and the BIG Sports campers also took several secchi disk measurements around Polson Bay.

Mary McDonough is another one of the citizen scientists that signed up to participate in the dip-in. She plans to make a family event out of their participation. McDonough’s daughter Sarah and her kids are going to do it with her. “It’s something to do with the grandkids,” says McDonough. “We’ll go out tubing, but they have a job to do.”

McDonough attended one of the training days at the biological station, so she feels confident in her use of the secchi. She is among those taking water samples for testing as well. She has already done a test dip with the secchi disc, and she plans to take the first official reading in Rollins on the west shore 50 yards off their dock. Then they’ll go to Dayton bay and take another reading there.

She’s happy that she and her family are involved in the monitoring of the lake’s water quality.

“We love the lake, have a place on the lake and want to keep it clear and pristine, and spread the word,” she says.For more information and to find out how to register, please visit the Flathead Lakers website at https://flatheadlakers.org/adopt-secchi-flathead-lake-dip. Those interested in sponsoring future Dip-In or Citizen Science projects can contact Shawn Devlin at shawn.devlin@umontana.edu.