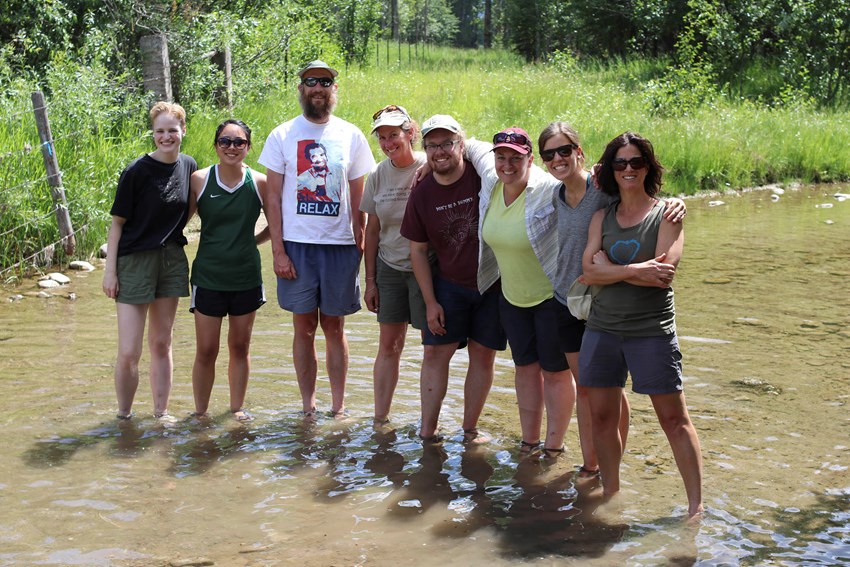 Fifteen minutes past West Glacier, Montana, on US Highway 2, there is a straight stretch of road running through a floodplain under far blue peaks. Turning and crossing the train tracks brings you to a field at Nyack Flats. It’s home to a herd of cattle, a squeaking chorus of fat Columbian ground squirrels, and the University of Montana’s Nyack field research camp.

I’m here to talk to researcher Bob Hall, and see his work in action. Hall is an award-winning stream ecologist; one of the most respected in his field. He’s been a professor at the University of Montana’s Flathead Lake Biological Station for a year, after spending 19 years at the University of Wyoming. He does much of his current field work here along the Middle Fork Flathead River. 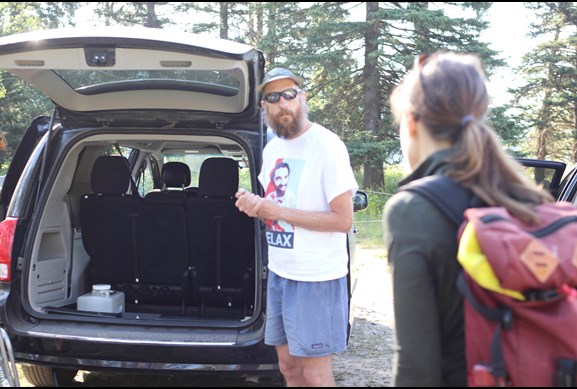 Hall parks his Subaru at the end of a winding dirt road in front of a tiny research cabin and unfolds his tall body out of the car. His postdoctoral researcher, fellow Cornell University alumnus Joanna Blaszczak, gets out of the car with him.

Erin Hotchkiss, and Michelle Baker, researchers from Virginia Tech and Utah State University respectively, pile out of their cars with a group of their students to join Hall in front of the cabin. They’re visiting Montana to do stream fieldwork with Hall for a couple of weeks. The Bio Station and others have been conducting river and floodplain research here since the 1980s, making this unassuming place one of the most studied floodplains in the world.

This year, Hall, Hotchkiss, and Baker got a joint National Science Foundation grant to study organic carbon cycling in streams. Fresh water bodies are a global source of greenhouse gases, and a deeper understanding of the carbon cycle as it relates to streams is important in the face of a changing climate.

Scientific research is sometimes viewed as a solitary endeavor, but Hall sees it as a vibrant, social process that has some parallels to his beloved hobby of homebrewing beer. He likes the people he works with, the collaboration and the creative control in both the homebrewing and science worlds.

“People’s vision of science is the idea of some investigator toiling away in the lab waiting to say ‘Eureka!’ and that’s not it at all,” he says. “It’s this incredibly social process; much more social than I think people understand.”

He says that the best research happens at the lines between disciplines. He likes to learn from people who do things differently or better than he can. Without his collaborators, he says he couldn’t have achieved as much as he has, as one of the most published stream ecologists of his cohort. “If all I did was study carbon cycling in streams using only what I know I’d be very ineffectual,” he says. “I spend a lot of my time working with geomorphologists that know things that I don’t know, or working with chemists who do things I can’t do.”

With everyone assembled now, Hall, Hotchkiss and Baker gather together their oxygen sensors. They heft giant batteries, folding chairs, and a cooler and start walking down an overgrown farm road along a little creek. Hall’s sandals make large, dusty impressions in the roadbed.  Hotchkiss and Baker follow in the footprints with the students and interns behind them. It’s 9:00 in the morning, and they’re already laughing and joking together.

Hall is a pioneer in viewing streams holistically, almost like living organisms. He and his colleagues study the stream’s metabolism. Essentially, they measure what the stream “eats” and “breathes.” Everything that goes into a river or stream doesn’t just flow right through it. Some of the stream’s “food,” known as organic carbon, is taken up by the bacteria in the stream or stored to be released later, sort of like how an animal stores fat. Streams also give off carbon dioxide, like an animal when it exhales. Terrestrial cast offs like pine needles and other detritus is broken down and dissolved into the water, where it's referred to as “dissolved organic carbon.” Nobody knows how much dissolved organic carbon is used in the stream and how much is transported on towards the river. If the researchers can calculate this, it will give them a much more accurate picture of how carbon cycles in the water.

Hotchkiss is the lead researcher on the grant funding this research. Hall was her advisor for both her master’s and PhD. She saw him give a talk at a conference on stream and lake ecology when she was an undergraduate, and decided she wanted to work with him.

“He came off as a quirky and interesting dude,” she said.

Hotchkiss says Hall expected a lot, but never checked up on how much time she spent at her desk. He understands that life is not just about work.

“He has a good work-life balance, and I wanted a mentor who had that,” says Hotchkiss “We both like music, and beer, and being outside.”

Hotchkiss sums Hall up pretty well in one sentence.

“He takes doing good science seriously, but he doesn’t take himself too seriously, which I appreciate,” she says. 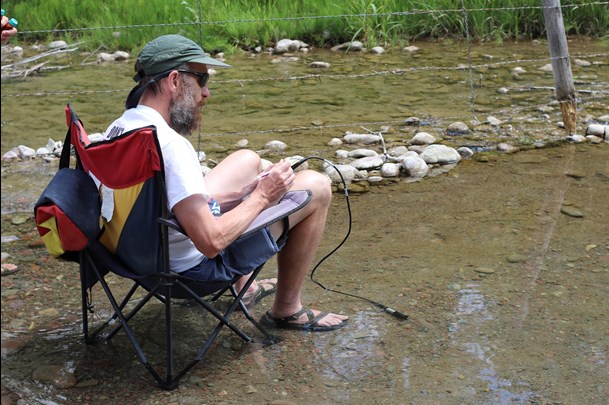 Outside of his 25 year-career of stream research, Hall is a homebrewer and a Grand Master beer judge who specializes in American pale ales and Belgian styles. When I ask him what he likes about homebrewing, he says he likes the people he gets to be around, the creativity of making something good, and the control of doing it himself. He doesn’t like beer that he can buy at a grocery store. He’s also an avid cyclist and telemark skier. He and his wife, Nanette Nelson, just started kayaking together.

At 6’2”, extraordinarily long-limbed, and rail-thin, Hall is the only one in the group who can cross the barbed wire fence between the overgrown road and the small trickling spring by stepping over it.

“The benefits of a 36-inch inseam,” he says with a touch of smugness. “Who looks better, me or Mr. Snake here?”

He points to Steven Plont, Hotchkiss’s graduate student who is sliding under the fence on his belly.

Hall leads the fieldwork set-up like he’s the director on the set of a film, standing in the stream with his perpetual upper-body slouch. He scratches his chin and rolls clumps of his reddish-gray beard between index finger and thumb while he talks. His narrow face and slightly protruding ears are shaded by a faded olive hat with an odd, sweat-stained brim. The brim looks like it tried to go all the way around the crown of the hat but got tired three-fourths of the way and quit. He looks at the water through a pair of $200 Smith brand sunglasses on a neck strap.

After directing the set-up of the first couple of dissolved oxygen sensors along the bank. “Put it river right,” he says with characteristic sarcasm, “I read my horoscope today and that’s what it says.” He walks back upstream about 200 yards to start the experimental additions to the stream water. He ducks through brush and wades across the small stream with the gangly grace of a great blue heron. His faded blue-grey Patagonia shorts enhance the impression. Blaszczak and I plod along behind.

The first addition is salt water. Salt doesn’t react with anything in the stream, so none of it gets taken up by bacteria. This gives Hall a baseline to compare to his other additives to.

Hall hefts a tall, white pickle bucket off the grassy bank, and he hands me his iPhone to keep time. Embarrassingly, I struggle to read the tiny second hand through my sunglass lenses.

After taking off my sunglasses, I’m finally able to focus on the second hand. Poetically, for his carbon source additive, Hall has chosen to put malted barley from a local brewery into the water to simulate the color of dissolved organic carbon.

“This one will be more exciting [than the salt] because there’s going to be a big black cloud like somebody dumped in 16 pints of Guinness Stout,” Hall tells me.

However, there’s a quirk in the plans. The private landowner who allows the researchers access to the stream is moving his cows today. His little blue heeler chases the bellowing beasts right past the barley bucket, tipping it over.

Hall looks calmly down at the spilled bucket and watches his experiment puddling in a dark stain on the grass. “Bummer,” he says lightly. He leans to pick up the bucket and the words on the back of his white t-shirt come into view. “Don’t worry, have a homebrew,” the shirt reads.

Although there isn’t much of the barley left in the bucket, Hall decides to do the addition anyway. He’ll come back later in the week to do another one. As he pours in the barley, the clear water in front of him turns brown, and the color spreads like a drop of food coloring in a glass of water.

“Stuff goes wrong so often we just get used to that,” he says, “I don’t even get upset anymore.”

Hall is passionate about all the social parts of science including science education, and has mentored at least 15 graduate students as well as postdoctoral researchers like Blaszczak.

His teaching philosophy changes depending on the student’s level of education. With freshmen undergraduates, his goal is just to get them excited about science. With upper classmen and graduate students, he sees his role as teaching them to teach themselves, so that they will be successful researchers. He likes to get them started the summer before they start their projects.

“I tell them ‘it’s because I need you to start failing early rather than later in your project,’” he says. “‘You can come and spend the summer making mistakes, and next summer you can learn from those mistakes in time to do your work.’”

Hall is a brilliant and innovative researcher, but he likes to keep his research in perspective.

“These aren’t big discoveries,” he says about his research advancements. “This isn’t the polio vaccine or the top quark [referencing the elementary subatomic particle] or something like that. On the other hand, it’s fun to find stuff out that nobody else knows and then write it down so that people do know it, and that’s the really important part of science; sharing the information that you’ve learned.”