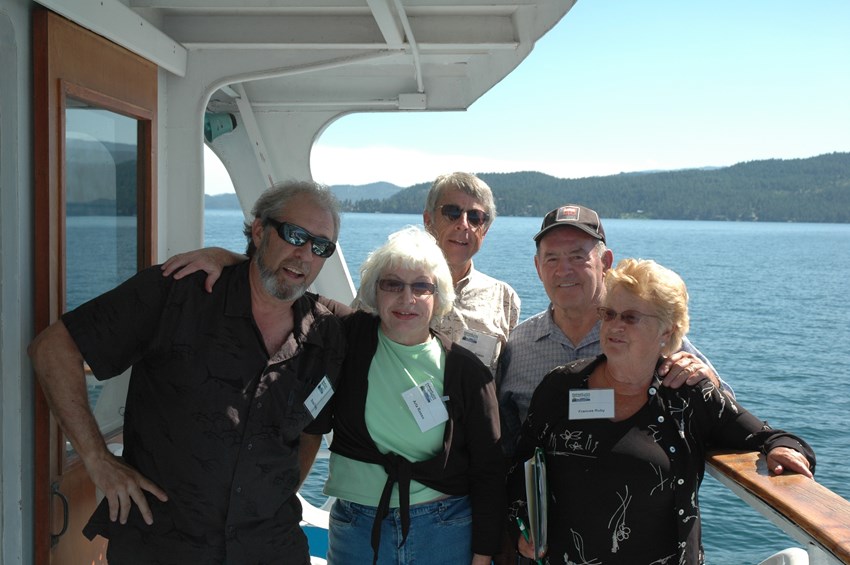 Somewhere in the quaint town of Lakeside, on a forested lot with a creek running through, Montana realtor Bruce Young (pictured above, far left) takes a moment in a garage that doubles as his office to contemplate how best to communicate his new idea.

It’s an idea he’s been thinking about for some time—a way to better engage local business communities with the protection and conservation of Flathead Lake. Before him, his desk is covered in documents and binders. There are posters of Flathead Lake on the walls. Neatly stacked piles of stickers encouraging observers to “Keep [Flathead] Blue” are arranged on a table nearby. Framed photos of Young posing with family and friends can be spotted here and there, and a friendly Springer Spaniel named Zac sits quietly by his side.

“Okay,” Young says, leaning forward as motes of dust flitter through bands of sunlight pouring through the window to his left, “here’s how I see it playing out.”

This isn’t the first time Young has had an idea that’s inspired him to act on behalf of Flathead Lake. The fourth generation Montanan first fell in love with the water as a child, when his family operated two Stancraft Marinas—one in Polson Bay, the other on Caroline Point in Lakeside—where they earned their living building fine mahogany boats. It’s a time of fond memories for Young, and the twinkle in his eye is noticeable as he reflects:

“I grew up here. I spent my childhood on this lake. I also always had an interest in the sciences and biology and things of that nature. The more I learned of these things, the more I began to realize how important Flathead Lake really was, both to our family business and to the quality of life of everyone that lived near the water.”

From that moment on, Flathead Lake would always be more to Young than a pretty view or fun place for summer recreation. He would see it as something more transcendent, the crowning embodiment of all the freshwater that has provided so much joy and prosperity to the communities of Montana.

“Freshwater is the most important commodity in the world,” he says. “And here we have if it coming from some of the most pristine places on earth. Places like Glacier National Park, and some of the Bob Marshall Wilderness areas. It occurred to me that if we can’t protect our water, when it’s this close to such a pure source, then how can we expect anyone else in the world to do it?”

With that, Young became a dedicated advocate for water quality in the Flathead watershed. He became a member of the North American Lake Management Society, and helped produce half-a-dozen educational videos about water. He started serving on advisory boards for local organizations with interests in sustaining Flathead Lake, groups that included the Flathead Lakers and the Flathead Lake Protection Association. During that time he was also earning accolades as a realtor. He was named Northwestern Montana Association’s Realtor of the Year in 2001. In 1995, he was named Re/Max Pacific Northwest Broker of the Year, and was later inducted into the Re/Max Hall of Fame Club.

“It’s not that I don’t believe in development,” Young says, acknowledging that his professional and personal passions may initially seem at odds with one another. “Growth is of course an important part of the quality of life in any community. And healthy growth is possible, as long as we have the science there to help guide us in making sound water management decisions. That’s why I believe so much in what the Bio Station is doing. We have the finest science the world has to offer here, and we all need to use that science to make this place everything that it should be without degradation.”

Young is referring to the University of Montana’s Flathead Lake Biological Station, a world-renowned research and education-based field station located on the shores of Yellow Bay. Since 1899, the Bio Station has served as the “Sentinel” of the Flathead watershed, monitoring water quality and working to prevent the spread of nonnative and invasive species. 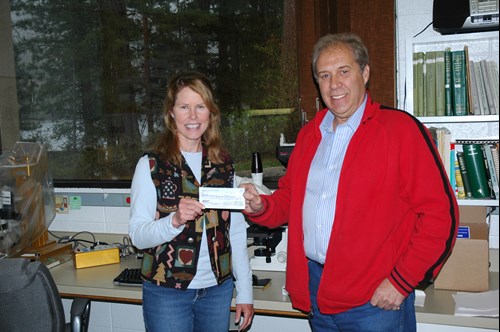 With his lifelong interests in the sciences, Young views the Bio Station’s research, monitoring, and education as vital tools in sustaining quality of life around Flathead Lake. The longer water in the Flathead Basin remains clean, the longer property values hold and the stronger the economy becomes. Flathead businesses, even those away from the lakes, benefit directly from our world-renowned water quality. If anything were to happen to that clean water, then many businesses and the livelihoods of all communities in Northwest Montana would be at risk.

“We’ve relied up here on an economic engine that’s run for as long as we can remember,” he says. “That’s tourism. It started with tourism of Glacier National Park in the early nineteen hundreds, and has been sustainable ever since. So much so that I think we’ve started to take it for granted, and that’s a mistake. We should be doing everything in our power to make sure people have a reason to continue visiting this part of the world.”

Young became a strong supporter of the Bio Station years ago. He was the one to conceive of and coordinate the “Keep It Blue” Flathead Lake license plate project—his first idea to help support the Station’s monitoring program. He secured the rights to use Whitefish artist Glen Prestegaard’s famous Polson Bay painting for the license plate’s image and directed all proceeds from the plates to the Bio Station’s monitoring program. He also joined the Bio Station’s advisory board, providing insights and guidance as he had done with other organizations in the past.

Yet despite all his positive work advocating and protecting Flathead Lake—a culmination that's earned him the unofficial nickname,"Mr. Flathead Lake"—it’s clear Young still worries about the future of his beloved water. He wants people to see the lake as he sees it, for people to realize that we’re all in this together. Not only as individuals, but as businesses, non-profits, and organizations alike.

“The greatest mistake we could make is to think someone else is going to look after our most precious resource, which is water. The public must be involved and stay involved and there is no better place to start than with the science being done at FLBS.”

Which is how he came up with his second idea, one that will prove a perfect convergence between his extensive experience as both a realtor and an advocate of Flathead Lake.

“I want to start a fundraising business drive that will support the Bio Station’s monitoring program,” he says. “And here’s how I see it playing out. If businesses are able to provide financial support, that’s fantastic. If they come up with some other creative way to engage with the business drive, that’s great, too. Whether business communities participate at a high level or a lower level, as long as we’re all working toward a common goal of doing all we can to monitor and protect the quality of our water, then this business drive will be a huge success.”

Young says that he plans on starting the Bio Station business drive campaign the middle of April. Businesses that would like to participate can contact him directly at bruce@mr.flatheadlake.com or 406-249-9787. Beginning on April 15, businesses can also donate directly through the Bio Station Business Drive website at http://bit.ly/FLBS-BusinessDrive.

Young says he’s already connected with several chambers of commerce in the Flathead area, and thus far has received an overwhelmingly positive response.

“It’s so clearly a win for everybody,” he says, leaning back in his chair and giving his dog Zac a scratch on the head. “It’s not about politics, or a money grab, or vanity. It’s about water, and water is about life.”

Young turns to look out the window, where dust motes continue to swirl. Maybe the chirping of the birds outside has grabbed his attention. Maybe it’s the soft babble of the creek as it courses through the trees. Or maybe it’s the prospect of a bright and sustainable future in the Flathead watershed, one in which all communities work together to ensure the stability and legacy of our most precious resource.

Whatever the reason behind the distraction, it’s clear that Young is done talking about ideas. Somewhere the water level of Flathead Lake is rising. Summer is coming, and Mr. Flathead Lake is ready to get back to work.