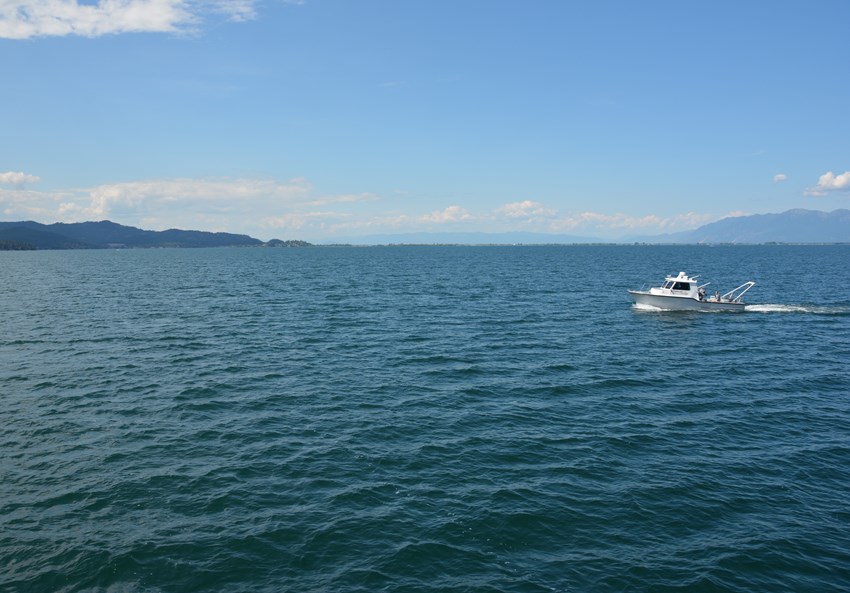 Jim Elser, director of the Flathead Lake Biological Station, delivered his State of the Lake address during the bio station’s recent Open House. He thanked attendees for taking the time to learn more about the bio station and its efforts on behalf of preserving Flathead Lake, one of Montana’s greatest natural resources.

“The state of the lake is blue!” Elser reported enthusiastically. “This is great! This is where we like our lake.”

Explaining what blue means in the context of lake ecology, Elser said, “We like it nice and clear. We like it clean.”

Scientists at the bio station perform advanced research at the forefront of their fields, Elser said. Their methods and findings impact the study of lakes and rivers around the world.

Montana has 3,323 named lakes and reservoirs throughout the state.

“Flathead Lake is the best of all of them,” Elser said to applause. “If you want to make an argument for another lake, form a line outside and I’ll deal with you in turn! We’ve been watching the lake for a long time.”

Displaying a satellite image from early March, Elser pointed out that Flathead Lake was 90 percent frozen over this past winter, which drew extensive attention from local newspapers and television stations.

“Isn’t it weird that a lake freezes over in Montana and it’s news?” he said. “What’s up with that?”

Elser said he believes it’s a sign that things are changing. Historically, the lake froze completely over on a regular basis—roughly once each decade—but it has not done so for nearly 30 years, making 90 percent ice cover a newsworthy event.

Unfortunately, the ice broke the bio station’s eight-year-old research buoy from its mooring and washed it up on an ice floe near Woods Bay. All of the weather and research instruments were destroyed. It is currently resting in the bio station’s boatyard and has not yet been restored. 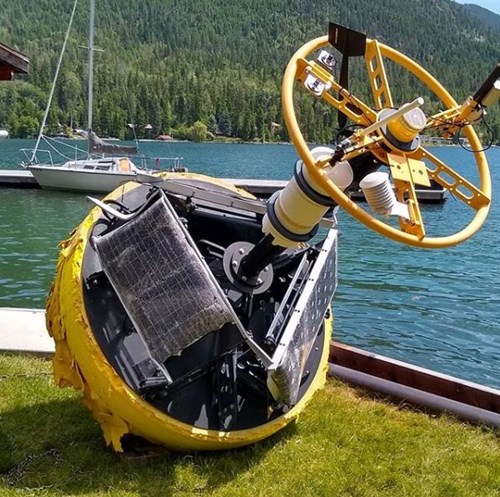 “In lieu of flowers, please visit our website and chip in,” Elser quipped. “It’s going to cost about ten to fifteen thousand dollars to replace it.” Elser said he hopes the buoy will be back in place and functioning again by next summer.

Elser described methods used to determine just how clear and blue Flathead Lake is, including a low-tech method that’s been around since the 1800s. During the summer, local residents with boats can sign up with either the bio station or the Flathead Lakers and “adopt” their own Secchi disks to measure the visual clarity of the water at various points in the lake. The local program is called the Secchi Dip-In. It largely enhances knowledge of Flathead Lake in places the bio station rarely, if ever, samples.

Participants lower the ten-inch black and white disks into the water at designated times, recording the depths at which the disks can no longer be seen. The data they report back to the bio station goes into a national database and is part of a larger North American Lake Management Society program. This year, 45 participants adopted 28 disks to measure Flathead Lake’s transparency.

In 2007 and 2012, the U.S. Environmental Protection Agency conducted a random, statistically rigorous sampling of 400 lakes across the country, according to Elser. That study revealed increasing water quality problems nationwide, including toxic algal blooms due to runoff from sewage, livestock and agricultural operations.

Fewer lakes are blue and clear. Many are trending toward green and even brown or murky. The average transparency in lakes in the United States is just over 2 meters.

Montana lakes are doing better in general than the national average in terms of lake water quality. Flathead Lake is one of the best. Its transparency has remained relatively stable, averaging about 11 or 12 meters over the past 30 to 40 years.

“We’re lucky to have an amazing lake with clarity like this,” Elser said. “It’s a really special thing. It’s one of the clearest large lakes in the Western United States.”

Less than 1 percent of Montana’s more than 3,000 lakes were sampled in the earlier EPA study, according to Elser. Flathead Lake wasn’t one of them.

“That’s our job,” Elser said. “That’s what the Flathead Lake Biological Station does.” 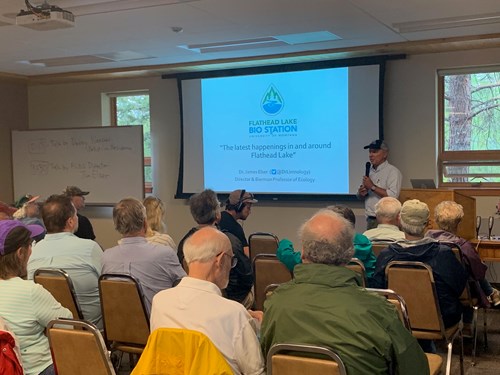 Based on data from the bio station’s ongoing Flathead Monitoring Program, nutrient levels in Flathead Lake may actually be decreasing—particularly phosphorus, which tends to drive algal blooms.

Scientists at the bio station aren’t exactly sure why. Elser said he’s convinced that investment in advanced wastewater treatment plants around the Flathead basin has paid off. Leaders from the bio station worked with state and federal regulators to press for more rigorous wastewater treatment after the lake began showing signs of deterioration and algal blooms in the 70s and early 80s.

It also helps that water in Flathead Lake cycles through every two years on average.  It’s often compared to Lake Tahoe where water may stay in residence for up to 600 years.

Additional new developments include expansion of the bio station’s lake monitoring program to include Polson Bay. Scientists have regularly collected and analyzed water samples from the deepest point of Flathead Lake since 1977, resulting in a robust data set from that particular spot. But other sections of the lake have unique characteristics, with variations in temperature, chemistry, and vegetation.

Excellent water quality wasn’t the only good news of the day.

“I’m happy to tell you that not only is the state of our lake blue, but it’s also mussel-free,” Elser announced. “I hope I will continue to say this every year until I retire and someone else has as their charge to keep this lake blue and free of invasive species. Because that is a very important job.”

“The good news is, not only do we know that these two things are true, but we know why they’re true,” Elser said. “We know what will cause our lake to lose its clarity. If we allow nutrient pollution in our lake from uncontrolled sewage systems or agricultural intensification, it will impact the clarity of our water.”

Scientists at the bio station are cooperating with the state and Confederated Salish and Kootenai Tribes to regularly sample for mussel DNA around the lake, an effective method used elsewhere to successfully detect mussel presence.

They’re also developing cutting edge sensor technology for detection of invasive mussel DNA that would remove the necessity of bringing water samples back to the lab for analysis. That technology is close to being implemented.

Elser mentioned previous research by bio station scientists identifying the link between the arrival of another invasive species, the Mysis shrimp, in the 1980s and the collapse of Flathead Lake’s kokanee salmon population in just three short years. Without the bio station’s ongoing lake monitoring, people might still be wondering why the salmon disappeared, he said.

“It’s good to know why we’re in the situation we’re in so we can do something about it,” he said. “I think we’ve been lucky so far. But it will take eternal vigilance. These threats probably won’t go away during our lifetimes or our children’s lifetimes so far as I can tell. It’s just going to be one of those things we always have to do, like brushing our teeth.”

*A condensed version of this story has been published by the Daily Inter Lake (August 21, 2019).