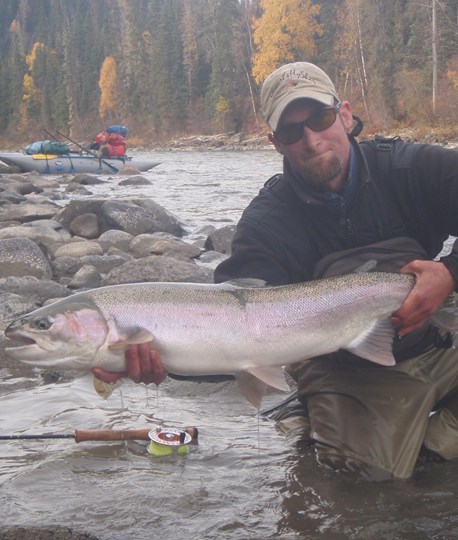 Tyler’s passion for the outdoors and aquatic ecosystems began at a young age while camping, floating, and fishing the Deschutes and Clackamas Rivers near his hometown in Oregon. It was the allure of the Montana outdoors and a career in aquatic ecology that first brought him to Montana in the late 90’s. In 1998, he completed his undergraduate degree at the University of Montana. Tyler then returned to his hometown and worked as a fisheries biologist and natural resource specialist with various state agencies. In 2004, Tyler got the opportunity to come back to Montana and work as a Research Scientist for the Flathead Lake Biological Station (FLBS). He was one of two FLBS scientists that began the Salmonids River Observatory Network (SaRON) project on the remote Kwethluk River in Alaska. Tyler spent two field seasons on the Kwethluk until 2006 when he switched gears from being a staff scientist to becoming a graduate student under the mentorship of Dr. Jack Stanford. Tyler’s graduate research focused on comparing and contrasting the ecology and the life history of lake-type and riverine Sockeye salmon (Oncorhynchus nerka) populations in the Kwethluk River. Tyler also ran field crews on the remote SaRON rivers of British Columbia before completing his master’s degree in the spring of 2008. Upon completion, Tyler stayed on as a Research Scientist at FLBS.

When not at work, Tyler can be found boating and fly fishing Montana’s rivers and lakes, or sneaking back to Oregon to chase steelhead with a fly rod. When not on the river, he enjoys backpacking and hiking in the backcountry. He couldn’t imagine a more beautiful place to live with his wife Samantha, son William, and their three dogs Salmo, Copper, and Sadie Mae.

I am a very versatile research scientist here at the FLBS and am often working on many projects that involve multiple disciplines of ecology. I work on the long-term project that monitors food web dynamics and water quality in the Flathead Lake-River ecosystem. I also work within a larger research group (that includes the Elser, Devlin, and Church labs) that asks questions about how chemical, physical, and biological processes influence the food webs of the Flathead and Whitefish Lake ecosystems. Another aspect of my work, asks questions about how climate change, introduced species, and natural and anthropogenic changes to lake and river processes affect food webs, and in turn, how changes at different trophic levels affect the rest of the ecosystem. In 2016, we started a project that investigates the nutrient dynamics (including stoichiometry) and food web establishment/development of periglacial lakes or "new lakes" that are tied to the recession of glaciers and how these new lakes influence downstream food webs in Glacier National Park, MT.

I have spent many years working in systems that support salmon, steelhead trout, trout and char populations and so my research interests and projects encompass many aspects of fish ecology. A large aspect of my work on the SaRON project was to understand how the environment, local adaptations, species interactions, and population genetics influenced life history diversity in salmonids. My current research also focuses on a variety of fisheries and conservation genomics projects, including the genetic rescue of an isolated westslope cutthroat trout (Oncorhynchus clarki lewisi) population near the headwaters of the Swan River, MT.

I am also involved in projects that are developing novel early-detection techniques for aquatic invasive species (AIS) in lakes and rivers using environmental DNA (eDNA) techniques.