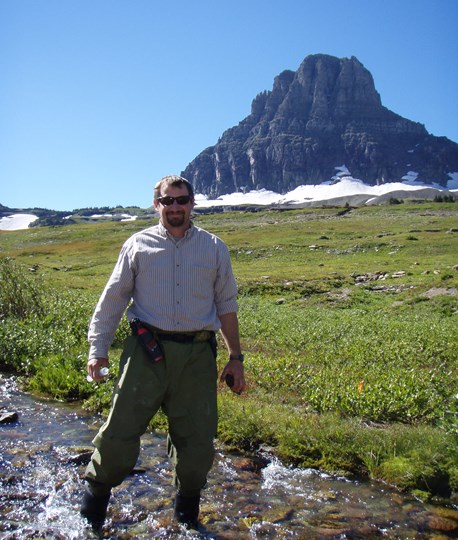 Phil began working at the Flathead Lake Biological Station in July 2001 and has engaged himself with a variety of researchers on a myriad of projects favoring none.  A majority of his work involves GIS and Remote Sensing with the underlying focus of relating floodplain habitat complexity to biotic and anthropogenic metrics and of modeling streams at differing discharge rates as they relate to geomorphic work - with the goal of systematically rendering the long-term water and riparian quality of water bodies in the Pacific Northwest.

Phil's professional capacity has him collecting aerial imagery through a high-resolution camera from either Cessna airplanes or drones and analyzing the imagery in the FLBS GIS lab; coordination of data collection and maintenance of the RiverNet and LakeNet environmental sensor networks on the Nyack Floodplain research site (located on the Middle Fork Flathead River and around Flathead Lake, respectively); collecting physical, chemical, and biological data in Flathead Lake as part of the long-term Flathead Lake Monitoring Project and in Whitefish Lake for the Whitefish Lake Monitoring Project; to his involvement of various education outreach programs to local schools and student groups.

Of note he has collaborated on the Biocomplexity Project on the Nyack Floodplain, Montana; the Snake River Project on the Middle Fork of the Snake River, Idaho, and the Reaches Project on the Yakima River, Washington. He has also participated on projects including the Salmonid Rivers Observatory Network, Glacier Vital Signs in Glacier National Park, Glacier Assessment Project, and the Transboundary Flathead River Coal Mining Initiative, as well as assisting in the ecology courses taught to summer students at the station.

As of late Phil is the GIS database manager for the Crown Manager’s Partnership, and coordinates the Aquatic Invasive Species sampling efforts for FLBS.  Phil also holds a seat on the Upper Columbia Conservation Commission (UC3) in Montana’s sustained push against aquatic invasive species.