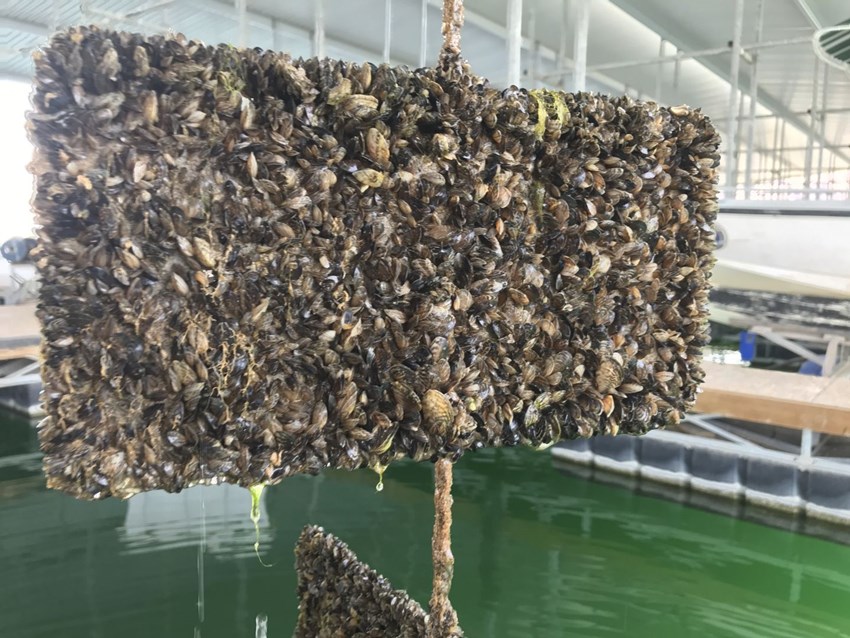 In mid-April, a team of researchers from the Flathead Lake Biological Station (FLBS) traveled to the Lake Mead National Recreation Area in southern Nevada to conduct field tests on a new, cutting-edge device called the “DNA Tracker”. The team consisted of FLBS Director Jim Elser, research professor and technologist Cody Youngbull, and research scientist Zane Lindstrom. They arrived with the hopes that the DNA Tracker would perform as it had dozens of times before in the laboratory – detecting invasive mussel DNA extracted from samples collected from plankton net tows – thereby proving its potential as an invaluable tool in the fight against aquatic invasive species (AIS). 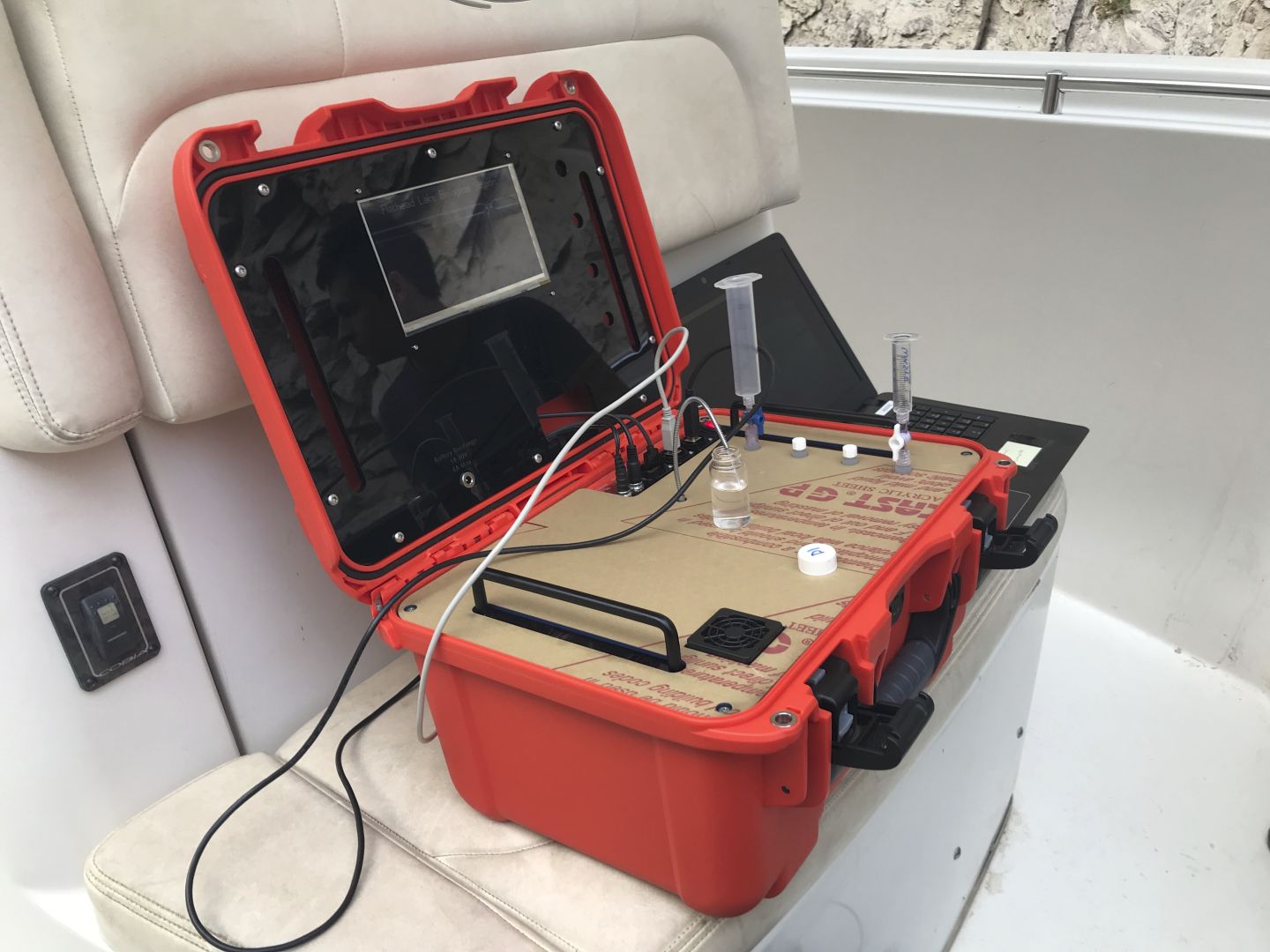 But that’s the thing about research and field work. Things don’t always go to plan.

“It was like we built this machine to make this discovery,” said Youngbull, inventor of the device. “And ironically, it came out of a Hail Mary pass to save a field deployment.”

To better understand what happened at Lake Mead, a little background on the DNA Tracker is required.

Invasive mussels were first detected in the Missouri River Basin of Montana in 2016. They’re a highly damaging species, often spreading like an infection and greatly impacting the economy and ecology of a region. Agencies and stakeholders across Montana have been increasing AIS education and prevention measures to keep the invasive mussels from spreading elsewhere in Montana. In particular, efforts have been dedicated toward keeping the Flathead, Kootenai, and Clark Fork River systems clear. These serve as the headwaters of the Columbia River, the last major river system in the US that doesn’t have invasive mussels.

In the battle against AIS, early detection is key, as finding small localized populations of invaders gives the best hope of eradication and of preventing further spread. This is where the DNA Tracker comes in.

The DNA Tracker is a digital PCR (polymerase chain reaction) machine. It’s manufactured by Youngbull and his team in the FLBS SensorSpace environmental sensor lab, and is specifically designed to analyze and test water samples in near real-time for evidence of the organisms that live there using environmental DNA (eDNA). DNA is the building block of life, and organisms are continually leaving it behind through their shed cells, waste products, and carcasses. Unlike traditional PCR machines, which are large and expensive and meant to be operated in a lab, the DNA Tracker is light-weight, runs on battery power, is cost-effective, and is small enough to carry in a backpack.

Here’s how it works.

Samples of filtered lake water containing extracted eDNA are sucked into the machine through a small tube roughly the same diameter as pencil lead. The water is then carried through the tube and is broken down into thousands of individual droplets, each less than one billionth of a liter in size. Reagents targeting the DNA being sought are introduced and the machine analyzes each droplet to see if it contains the targeted eDNA by comparing it to a template. If a droplet contains the eDNA, it glows and is marked as a positive detection or a “1”. If it doesn’t, it’s marked as a “0”. In the final step, the DNA Tracker counts the total number of 1s and 0s to determine the concentrations of targeted eDNA present in each water sample, and then outputs the results.

The DNA Tracker’s efficiency of detection, when combined with its portability and affordability, would be enough to set it apart in the field of eDNA analysis. But the innovations don’t stop there.

As previously mentioned, before testing DNA is usually extracted, a process through which the DNA is isolated and purified. The most important phase of extraction is known as lysis, which is the disintegration of a cell by rupturing its wall or membrane. In other words, it’s the step that gets the DNA out of the cell. In a laboratory, a typical extraction process can take anywhere from several hours to a day or more. Such a lag time simply isn’t feasible out in the field.

So, thanks to a U.S. Fish and Wildlife Service grant, Youngbull and his team came up with a new extraction process. One that could be done rapidly and inexpensively in the field. 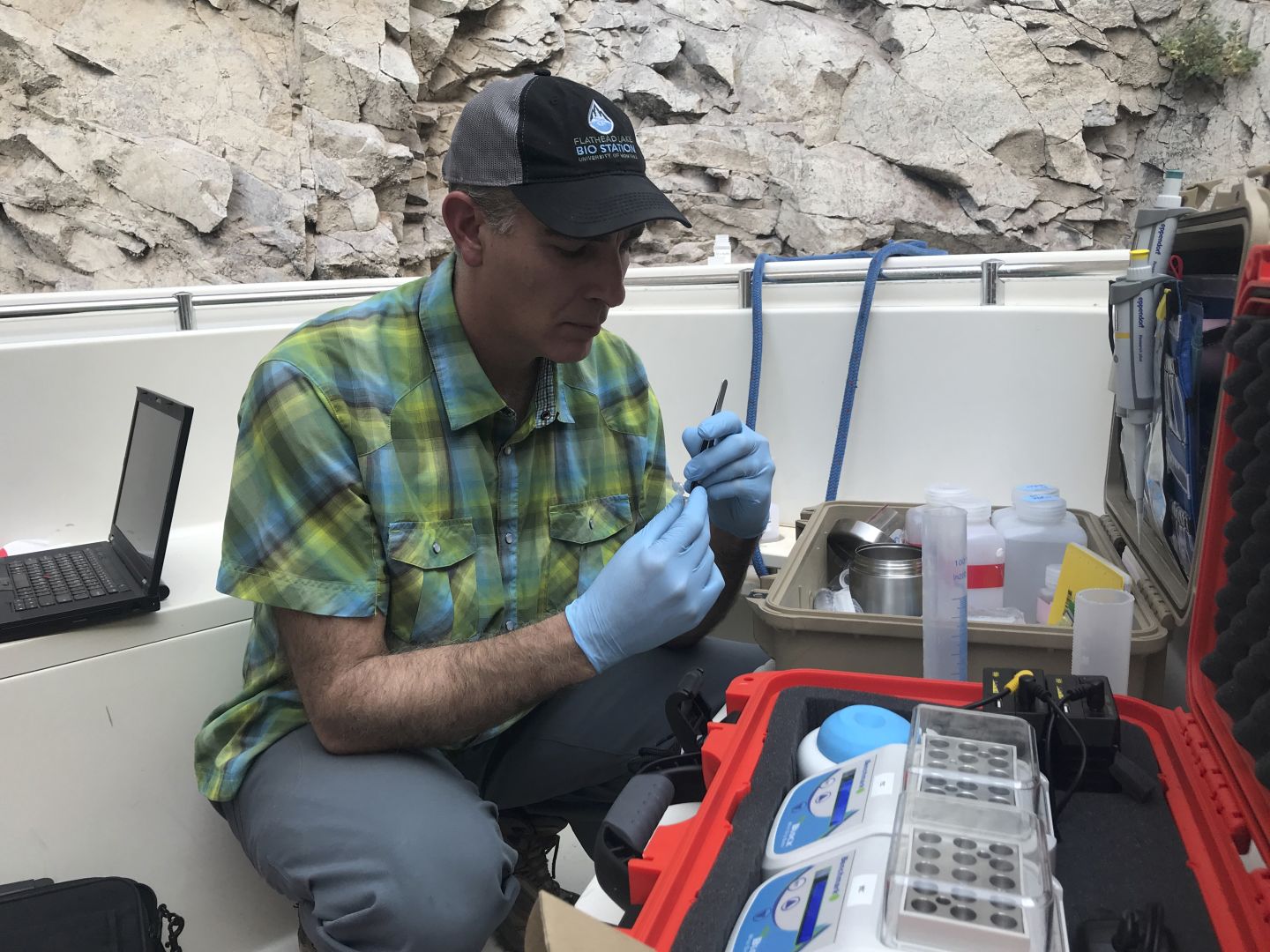 “We spent this past year coming up with DNA extraction protocols that are amenable [to use in the field],” Youngbull said. “We gave ourselves restrictions. We decided our sample prep could take no longer than fifteen minutes, had to be able to be performed by an untrained person in nearly any location, and had to cost less than $3 per sample. We followed these parameters, and felt like we came up with a pretty good process.”

Armed with these new extraction protocols, the DNA Tracker now had the ability to indicate the presence of invasive species DNA in less than an hour. Youngbull and his team effectively created a portable PCR device that could analyze eDNA on site and rapidly. Numerous rounds of testing at FLBS, and there was only one thing left to do.

The DNA Tracker needed to be tested beyond the lab and in an ecosystem already infested with invasive mussels. Lake Mead was the obvious choice.

Invasive quagga mussels were first discovered in Lake Mead in 2007. Since then, the mussels have enjoyed a decade of unchallenged growth, clogging up water and hydropower infrastructure such as Hoover Dam and overwhelming the downstream Lakes Mohave and Havasu. This has had a dramatic impact on the economy, ecology, and human enjoyment of the region; and stands as an ominous warning to other freshwater ecosystems in the western U.S. It also serves as a prime location for those looking to put an innovative, portable PCR machine through a trial run.

With DNA Tracker in hand, Elser, Youngbull, and Lindstrom flew down to Nevada, and promptly went to work. Assisted by National Park Service researchers, they prepped their boat, readied their instrument, and with high hopes ventured across the lake to collect mussel larvae in plankton nets and extract their DNA to test their first mussel-infested water body. But there was a problem.

They tried again, with different samples. Again, the DNA Tracker yielded no results. While the DNA Tracker itself seemed to be in operating order, there appeared to be some sort of glitch in the extraction process that prevented them from getting any detections. The field test, it seemed, was quickly turning into a bust.

“The next day, we said, ‘well, let’s see what we can do to try to salvage this trip,’ ” Youngbull recounted.

The new plan was to collect a water sample, pass it through a filter to rid the sample of debris, and then run the filtered sample through the machine without the extraction process. There was a chance, they reasoned, that the invasive mussel cells would go through the lysis phase inside the DNA Tracker. Which brought them to another problem. The only filter they had on board the boat was highly constricted, with pores only a couple of hundred nanometers across. While it would effectively remove all the grit and other particles that might clog the Tracker’s delicate internal passageways, complete mussel cells would be eliminated from the sample as well.

Still, they figured it was worth a shot.

Collecting fresh samples from the lake, they passed them through the filter and into the DNA Tracker. Less than an hour later, they had results—positive hits for invasive mussel DNA.

Youngbull attributes the positive hits to something called free eDNA. In a freshwater ecosystem—and everywhere, for that matter—cells are dying all the time. As they decay, they naturally go through the lysis phase, and there is a window in which DNA is present. The problem with free eDNA from a research standpoint, is that it doesn’t last long – only hours or days. Free eDNA is quickly eaten by other cells or broken down by UV light.

“This is the stuff that everyone throws away,” Youngbull said. “That’s what we put in our machine, and it quantified very nicely. We discovered the utility of this machine as a free eDNA analyzer, which makes it totally unique, as compared to any other tool out there.”

The ability to test free eDNA makes the DNA Tracker a game-changer.

“We’ve always had in mind that Cody’s [instrument] could run autonomously,” said Elser. “Ideally, that’s what you want. To not have to go out and manually run something through a system. So that’s the hope, now. By taking the extraction step out of the process, you have a tool that’s more efficient and easier to use and that might even run robotically.” 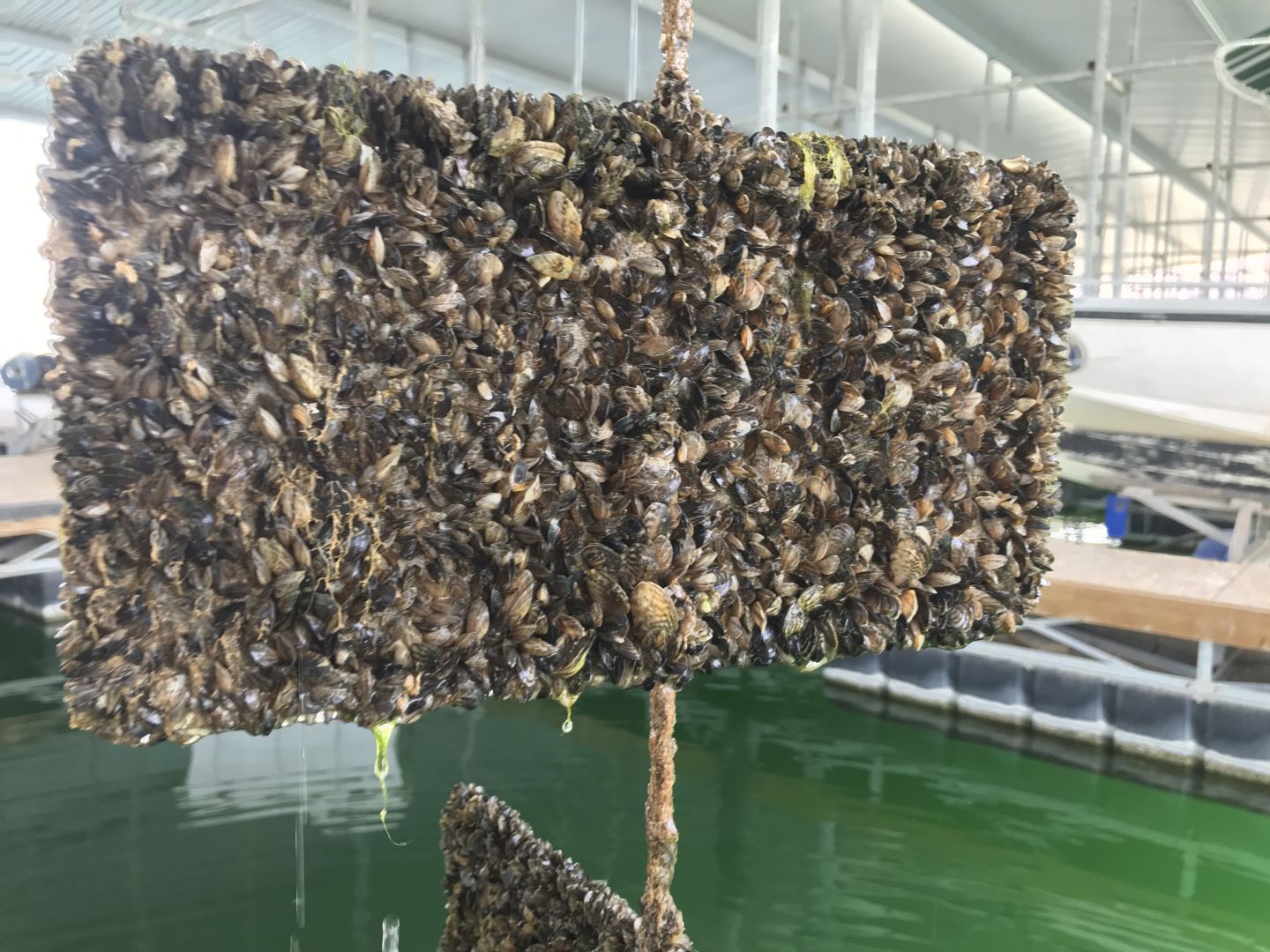 In the two days following their discovery, the researchers used the DNA Tracker to analyze levels of free eDNA in Lake Mead. They also validated their new discovery on a boat that had recently come out of the water. They collected samples from the boat, ran them through the DNA Tracker, and got a positive hit for invasive mussel DNA. The boat then went through the decontamination process, and they ran the tests again. This time, there was no evidence of mussel DNA. The DNA Tracker had provided empirical validation that the boat was clean.

Contaminated boats are the biggest threat to spreading invasive mussels to uninfected areas like Flathead Lake. And once invasive mussels get in, it’s nearly impossible to get them out. This is why the state operates boat inspection stations around the perimeter of Montana as well as at all entry points to the Columbia River Basin of Western Montana. This is also why the U.S. Fish and Wildlife Service funded FLBS to test and use Youngbull’s DNA Tracker at boat inspection stations in the Flathead.

“The question is, will it help a lot?” Elser said. “That depends on how fast it can be deployed, how reliable it can be, and how it can be used most effectively. Right now, prevention [of the spread of aquatic invasive species] is the most important thing.”

As for the future of the DNA Tracker, Youngbull and his team are currently investigating ecological field uses that include early detection of a variety of AIS as well as determining the presence/absence and relative abundance of any fish or wildlife species of interest. There also may even be a “smoke alarm” version that could be placed near a boat loading area and “alert” whenever an AIS contaminated boat hits the water. This summer, Youngbull will have a student intern dedicated to DNA Tracker work on Flathead Lake, with an objective of mapping distributions of free eDNA from various species around the lake. To this point, no invasive mussels, nor their DNA, have been found in Flathead Lake.

Youngbull also said his SensorSpace lab is actively looking for potential partner-customers interested in using the DNA Tracker in other fields. He sees potential applications in the food industry, for example, detecting the presence of food-borne illnesses like E. coli or detecting respiratory diseases that occur in shared water troughs used by cattle and other livestock.

In the meantime, a vigilant focus remains on stopping invasive mussels and other AIS from reaching Flathead Lake and other waters of Montana.

“Some people tend to get resigned to mussel invasion” Elser said. “They have this idea that as soon as an infected boat touches Flathead Lake, the lake is done. Now, it might only take one contaminated boat, that’s true. But one contaminated boat doesn’t guarantee an established infestation of mussels - the chances of successful invasion are actually quite low. I like to think of each contaminated boat that goes into the lake as a ticket to a really bad lottery where the "prize" is a ruined lake. Nobody wants to win this really bad lottery. So what do you do? We have to ensure we’re buying as few tickets as we can.”

Now, with the help of the DNA Tracker, such an objective may be well within reach.