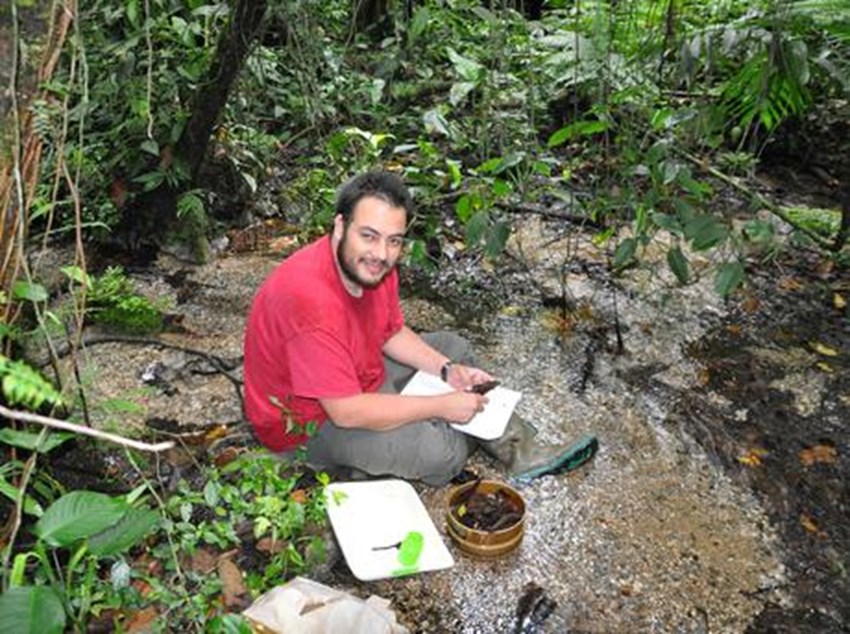 Pavel García Soto: Searching for Answers About Shredder Insect Diversity in the Neotropics

Growing up in Guatemala, Pavel García Soto noticed a pattern. As you move closer to the Equator, there is a general trend of increasing biodiversity. The pattern is evident in almost everything — plants, mammals, birds, you name it.

But there was a notable exception: aquatic shredder insects.

“The aquatic shredders are one of those groups that are less diverse in the tropics than in the temperate zones,” Pavel said.

Shredders hang out in streams and consume fallen debris, or leaf litter, as food. Pavel noticed their pattern of low diversity first while pursuing his undergraduate degree at The University of San Carlos of Guatemala, and then again when he moved to Mexico to study at the Instituto de Ecología A.C. The superb diversity that was true of nearly everything else living in the tropics did not translate to shredder insects. Pavel chose these insects as his primary study focus.

“We know now, it's apparently lower diversity in the tropics than in temperate zones for shredders,” Pavel said. “That is opposite to the general pattern of diversity.”

Pavel decided to find out why.

This is the research interest that drew him from Guatemala to Wyoming, where Professor Dr. Bob Hall had the appropriate stream ecology expertise to guide Pavel in his research. When Bob left the University of Wyoming to begin working at the Flathead Lake Biological Station, Pavel packed his bags and came with him. He is now pursuing his Ph.D. at the University of Montana, and has been working at the Bio Station for five years.

Now, Pavel splits his time between Guatemala, where he gathers shredder insect and leaf litter samples for his research, and the Bio Station, where he tests and analyzes them.

He gathers specimens from different altitudes, allowing him to see how different environments affect the insects. The hope is that his research will help explain why aquatic shredders in the Neotropics do not exhibit the same diversity as other organisms.

“I'm bringing [the shredders] here to do some tests to measure [things like] how much carbon, nitrogen and phosphorus are in their bodies,” Pavel said.

Pavel likes working at FLBS because of its unique research environment. When he isn’t studying shredders, Pavel enjoys exploring the ecological diversity surrounding the Bio Station. One of his favorite pastimes is birding, and he sees both familiar and unique birds on the station grounds. But he doesn’t have a favorite. According to Pavel, it is just as exciting to see a bird for the hundredth time as it is to catch a first glimpse.