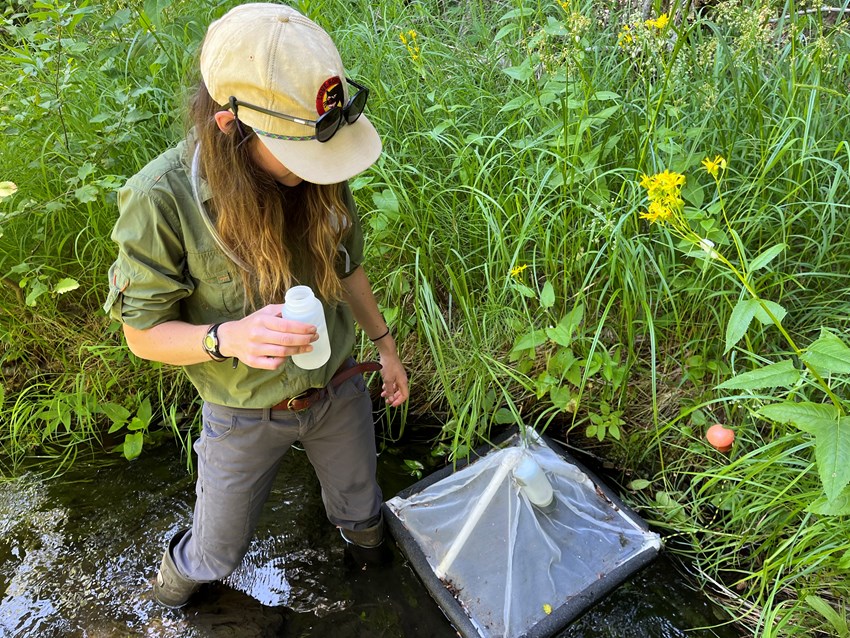 In the afternoon heat, graduate student Michelle Fillion chases a herd of black cows up the length of Lost Prairie Creek, where the cattle just finished stomping, tipping, and dumping on dozens of aquatic insect traps she set up the previous week. While Michelle’s had similar problems with deer and bears earlier in the summer (“Bears love floating toys”), this is the first run-in she’s had with cows, and the greatest extent of damage yet.

While the traps are relatively simple and inexpensive, the data they are collecting is vital to Fillion’s master’s project for the University of Montana’s W.A. Franke College of Forestry and Conservation. The various invertebrates caught in each plastic prison indicate how artificial structures known as Beaver Dam Analogs installed in Lost Prairie Creek, near Missoula, Montana, are affecting the stream’s overall biological diversity.

As the bovids hightail it over the horizon, Fillion raises her arms in the air, savoring the small victory despite having to reset the traps and make another trip out next week.

Beaver Dam Analogs, or BDAs as they are commonly called in the stream management world, are a recent innovation for process-based restoration that can emulate the effects of beaver dams on small streams that have suffered a great deal of degradation. They are used to remedy downward erosion (known as stream incision), the disconnection of flowing water from its floodplain, and decreases in base flow (the water that sustains a stream all year, regardless of precipitation).

Simple in structure—a series of posts with native tree branches lodged in between, stuffed with foliage and brush—BDAs have shown to be successful in reducing all of these types of damages.

BDAs have only been around for a few years, but hundreds have been installed across the Western United States. While the positive effects BDAs have on streams themselves is apparent, the project Fillion is working on examines how these structures may be affecting aquatic macroinvertebrate populations, which would therefore affect the populations of all of the species dependent on these systems, from birds and amphibians up the food chain to coyotes and even bears.

The investigators on this project are hopeful their results will provide more information about how BDAs influence stream ecosystems. Their basic hypothesis is that because BDAs increase water surface area and the amount of habitat variety, there will be more biological production (often measured as carbon), including insects emerging from the stream, leading to more fish, spiders, birds, and just about everything else.

This is only Fillion’s second summer of bug collection, but the project itself has been in the works for a while now. It began when Ben Colman, an aquatic ecology professor at UM’s W. A. Franke College of Forestry and Conservation, met Rachel Malison, then a postdoctoral scholar based at UM’s Flathead Lake Biological Station (FLBS), at the Montana Aquatic Research Colloquium, a conference that brings together Montana’s freshwater researchers held bi-annually at FLBS. Right away, Colman and Malison could tell they had shared interests and made plans to collaborate on a project in the near future.

Then in 2020, the W.A. Franke Freshwater Conservation Initiative—impactful, philanthropic funding that provides competitive research fellowships to faculty and student teams working on the complex issues of global water management and conservation—specifically called for an aquatic ecology project that involved collaboration between UM’s College of Forestry and Conservation and the Bio Station. Seeing the chance, Colman and Malison, at this point an Assistant Research Professor at FLBS, joined with Lisa Eby, another UM aquatic ecology professor at the College of Forestry and Conservation, and created their project proposal.

The three primary investigators, Colman, Eby, and Malison, each focus on a different aspect of how BDAs alter stream ecology. Colman, with graduate student Hillary Schultz, is studying how carbon levels differ in streams with and without BDAs. Eby, with graduate student Andrew Lahr, is studying how BDAs might change the way fish move through a stream ecosystem. Finally, Malison and Colman are co-advising Fillion as she researches BDA effects on populations of aquatic macroinvertebrates, a technical term for invertebrates (mainly insects) that are large enough to be seen without the aid of a microscope. So, water bugs. 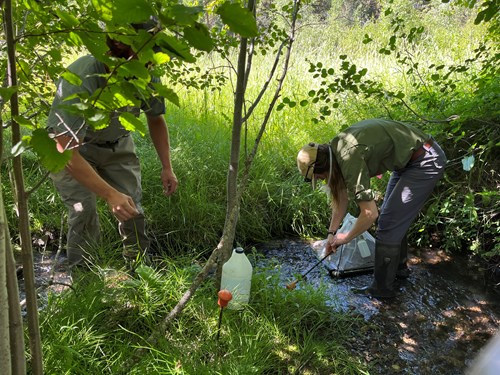 Malison, whose PhD studied how beaver dams influence juvenile salmon populations in a large river floodplain, said, “These Beaver Dam Analogs got a lot of people really excited, because you put them in, you can raise the water table … There's a lot of good reasons to have them, but they're often not necessarily put in for aquatic organisms.”

Fillion’s focus on macroinvertebrates is due to their incredible importance to stream ecosystems, which is why it’s vital to understand the effect of BDAs on their populations.

“Aquatic macroinvertebrates are wildly important,” Fillion said, “probably more important than a lot of people think they are. People are putting in these BDAs right and left, but we don't know how they're affecting the system as a whole. Along with a couple other people, I’m really the first to dive into the macroinvertebrate side of BDAs. BDAs have become very popular, but it's really important to see how they’re affecting this key part of the ecosystem before we can fully be confident.”

Fillion collects macroinvertebrates using three distinct types of traps at three different locations within the Blackfoot and Lolo watersheds, each with a BDA reach and a non-BDA control reach. Each reach is divided into an upper section, a middle section, and a lower section, and each section has three of each type of trap. Overall, that’s 162 traps that Fillion checks three times over the course of the summer.

First is the benthic trap. With the benefit of not having to be set out beforehand, the benthic trap digs into the sediment at the bottom of the stream and catches any insects, typically the larval forms of stoneflies and mayflies that may be buried in the mud and gravel.

Next is the surface trap. Nothing more than a plastic Tupperware filled with soapy water, this trap appears to flying insects as any other pool of water. Bugs that would typically land on water, like flies and midges, instead land on the trap, where the soap breaks the surface tension of the water, causing them to sink and drown.

Third is the emergence trap. A pyramid of tubing covered in a fine mesh, this trap floats in the water and catches insects as they emerge from the stream, including fully-grown aquatic insects. The insects collect in a cup of ethanol fastened at the top of the structure for preservation. Any stragglers that don’t make it to the cup have to be manually removed by Fillion using a rubber straw and a piece of mesh.

In addition to the macroinvertebrate sampling, there are several other aspects of Fillion’s project. When night falls, she walks up the stream with a headlamp and counts every spider she sees, separating them into two families. Game cameras at each section show what kinds of mammals and birds use the stream. Bird surveys that begin at sunrise are conducted three times at each location, and include every species of bird seen or heard. Overall, these different methods of counting animals help paint a picture of the biodiversity in stream reaches with and without BDAs, thereby helping to assess the broader effectiveness of BDAs.

“What we’re looking for in the BDA is a change in complexity in the river system as a whole,” Fillion said. “If you're looking at a small-scale type of diversity, you might find lower diversity [in a BDA reach], because it causes the water to pool, but if you look broader at the entire system that the BDA is on, you're creating more pools and then creating more runs to link those pools and then still increasing diversity because you're increasing the type of habitat available.”

Fillion is preparing for the project’s final year, made up of data analysis, manuscript preparation, and applying for future grants. But first, she has to finish collecting specimens. Three weeks after her first brush with cattle, she returns to Lost Prairie Creek for her last batch of samples. The cows have already trampled the site a second time, but, finally, the field work is complete.

Now the real work of determining how BDAs affect stream biodiversity can begin.