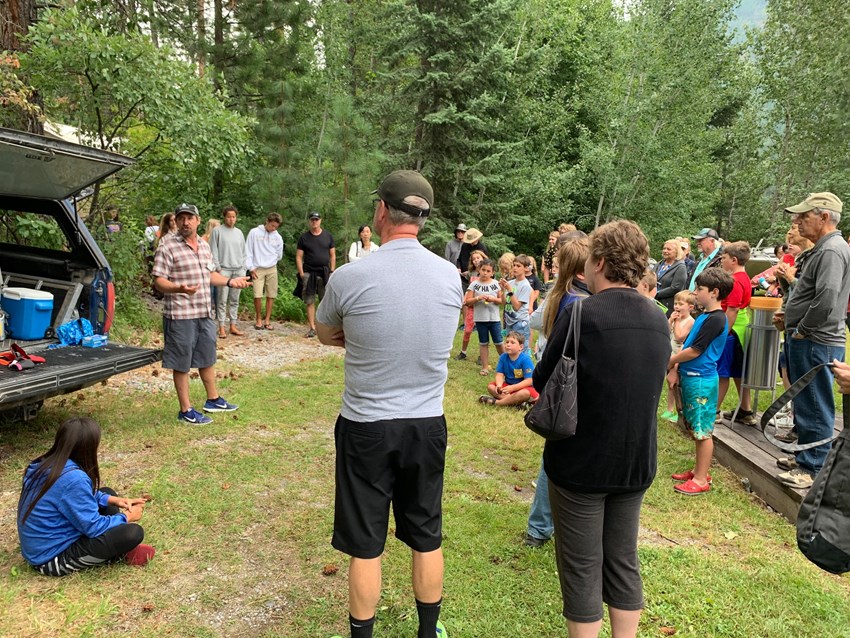 The main attractions at this year’s Flathead Lake Bio Station Open House on Friday included dog tricks and submarines. The event was a welcome diversion both for those wishing to avoid the rain and for those who didn’t mind a few sprinkles.

Children crowded to the front of a large group waiting to hear a presentation by Phil Matson on the lawn overlooking Yellow Bay. Matson coordinates the bio station’s efforts to detect and prevent aquatic invasive species from entering lakes and waterways in the Flathead Watershed. The current focus of those efforts is quagga and zebra mussels. 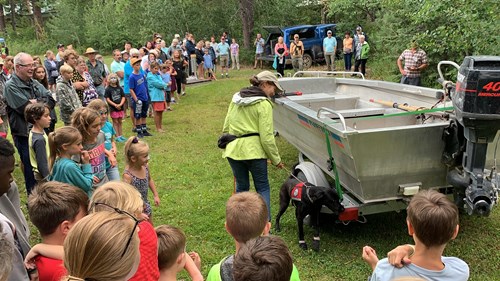 Deb Tiermenstein and her mussel-detecting partner Ismay demonstrate how effective dogs can be at sniffing out invasive mussels during boat checks. Photo courtesy Conna Bond.

Everyone knew what was coming. Ismay, a six-year-old, energetic black lab, rustled and whined in the bushes behind Matson, waiting to enter stage right and demonstrate her skills in sniffing out invasive mussels as part of Montana’s watercraft inspection team.

Prevention is key in keeping Flathead Lake free from the unwanted mussels that are relentlessly making their way across the continent.

Zebra mussels are believed to have arrived in America as stowaways on European ships in the mid-1980s. They were first discovered in the Great Lakes in 1988. Barely the size of a fingernail, they grow and adhere by the thousands to underwater surfaces, including rocks, plants, and docks. They’ve gradually spread westward attached to boats and other watercraft, taking over lake bottoms and washing up on beaches, their tiny shells as sharp as glass.

Boat inspection stations are now commonplace in Montana. Inspectors run their hands over boat surfaces, feeling for rough spots that might indicate the presence of invasive mussels. Matson explained how water samples are also collected and analyzed from various lakes to detect mussel DNA. Scientists and state officials want to see them coming.

“That’s just one tool,” Matson told the crowd. “Dogs are another tool the state uses to try and find the mussels before they take over.”

Ismay finally made her entrance accompanied by her owner, Deb Tiermenstein, who explained to the group that dogs can detect even the smallest scent of mussel from a source that doesn’t contain any actual mussel DNA. The mussels are such a threat that trainers are not allowed to use actual mussels in working with their dogs.

Tiermenstein originally trained Ismay and her sister Rosebud as cadaver dogs to help in search and rescue operations. She switched to training them for invasive mussel detection so they would get more time in the field. It’s a side gig that keeps them busy mostly in the summers. This summer they worked in Glacier National Park, inspecting boats and educating visitors about aquatic invasive species.

Ismay waited eagerly by the trees while Tiermenstein invited the group to gather around a boat that had been staged for the demonstration. Kids rushed forward to tell her where to hide a tiny vial of mussel scent in a nook on the back of the boat.

When Ismay was released and summoned, it took her less than 10 seconds to identify exactly where the mussel scent was coming from. She barked loudly and was immediately rewarded with treats and applause.

“Ismay is such a ham,” Tiermenstein said later in an interview. “She likes to interact and engage the crowd.”

Not far away, in the warehouse where the bio station stores its research boats during the winter, another crowd gathered to see two small white submarines that had come for a week of scientific exploration in Flathead Lake.

Sub owners Cliff Redus and Hank Pronk are members of Innerspace Science, a group that connects private owners of submersibles with scientists and educators.

Redus’s R-300 is a one-person sub. Pronk’s Nekton Gamma accommodates two, as long as the second person is under 250 pounds and is small enough to hunch cross-legged in the small space behind the sub’s front viewing dome.

Last year, they worked with UC Davis researchers in Lake Tahoe taking grad students down for rides and assisting with underwater sensor research. The visibility in Lake Tahoe wasn’t great.

This year, they turned their sights on the clear waters of Flathead Lake, contacting the bio station to see whether they could assist with any research needs. The answer, of course, was yes.

Research divers in Flathead Lake generally stay above 8 meters. That’s about the point where the warmer, less dense water meets the colder, more dense water below. The divide between the two layers is called the thermocline.

“It’s cold down there,” said Jim Craft, a bio station ecologist who has been studying Flathead Lake since 1988. “It’s no fun for a diver to go below the thermocline.” 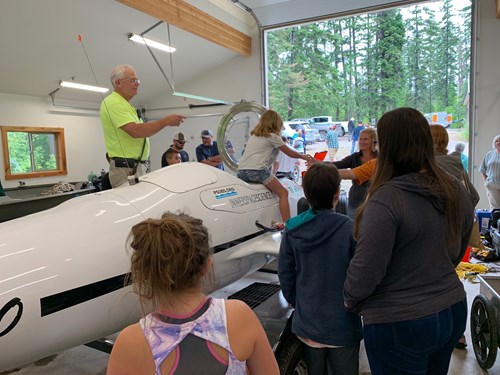 After a week of assisting Bio Station researchers, Hank Pronk and Cliff Redus (pictured) had their submersibles on full display during the 2019 Bio Station Open House. Photo courtesy Conna Bond.

After their first dive in Flathead Lake, Redus and Pronk told Craft they could see heat waves coming off the thermocline the way you see them rise from the highway in the dead of summer

“They can see things down there that we can’t see otherwise,” Craft said. “They’ve got big lights on their submarines. I want to know what’s down there.”

Craft wasn’t interested in going down there himself. He’s claustrophobic.

“Unless those subs are as big as my office, I’m not going down there,” he said.

He was especially interested in finding out more about what’s happening with invasive species, such as Mysis shrimp, below the thermocline. He also wanted to analyze plants, sediment and algae samples from deeper waters.

The Mysis shrimp don’t like warm water. They stay at the bottom of the lake during the day. It’s presumed that they only come up to feed as far as the thermocline at night, possibly dashing up and back to snatch tempting morsels from the warmer waters above.

These are things you can’t verify simply by taking water samples in the dead of night. You need submarines that can capture video and images of the water column while the shrimp are active.

At the Open House on Friday, Redus leaned over from above and helped a long line of wide-eyed children and a few sheepish adults climb in and out of his submarine for a few seconds of deep-sea fantasy.

Pronk watched from the doorway with a satisfied grin on his face as visitors got up close and personal with the submarines. He’s been building or renovating subs since he was a teenager and has five others at home. Sharing them with others is his favorite thing.

Sean Stevenson stood nearby and watched with a similar pleased expression. Stevenson is one of the divers who accompanies the submarine crew on these excursions, standing by to rescue them if something goes wrong. He used to be a rescue specialist with the Canadian Coast Guard.

Because Stevenson can only dive to about 250 feet, that’s about as low as the submarines will go as well. The lowest point in Flathead Lake is about 100 feet deeper than that, but the submersible explorers saw plenty. In addition to taking extensive photos and videos, they gathered water samples and vacuumed up sediment using a robotic arm on the Nekton Gamma. 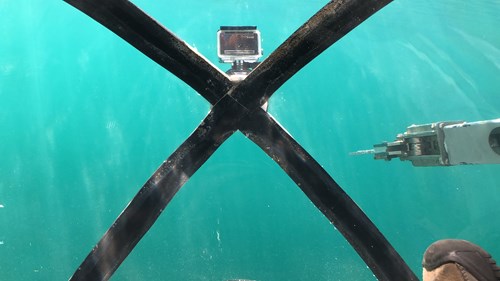 A passenger's view aboard Hank Pronk's Nekton Gamma submersible during the initial stages of a dive at Yellow Bay.

It will be a month or two before scientists at the bio station can analyze the samples taken by Redus and Pronk. Photos and video won’t be edited and ready for viewing for at least a few weeks. The bio station has no plans to get a sub of its own. Subs are expensive, and Pronk lives just four hours away.

“I’d be glad to come back anytime!” he said.

Meanwhile, the Nekton Gamma was delivered to a new owner after the Open House. In the future, it will be used to explore San Francisco Bay.

“It’s funny, my wife was sad when I bought it, and now she’s sad that I’ve sold it,” Pronk laughed.

It does have a bit of history. Jacques Cousteau purportedly went down in it once. But Pronk was ready to let it go. He’s working on a new project—a submarine capable of diving 3,000 feet. Of course, he’ll never actually go down that far.

“But I’ll hold the world record,” he said. “I just wanted the bragging rights. I didn’t have to build it to 3,000 feet, but I did. It’s an unofficial thing, right?”

“In your mind it’s official!” shouted an eves dropper.

“In my mind it’s fantastic.”

*A condensed version of this story has been published by the Daily Inter Lake (August 15, 2019).